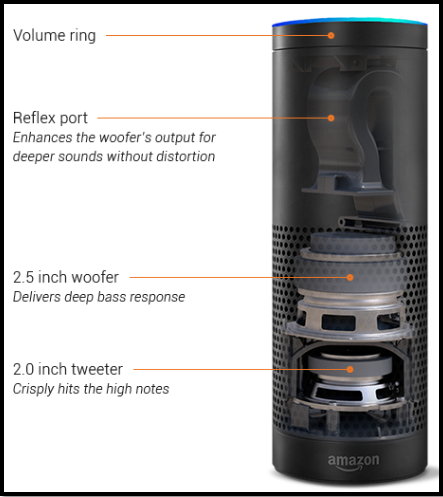 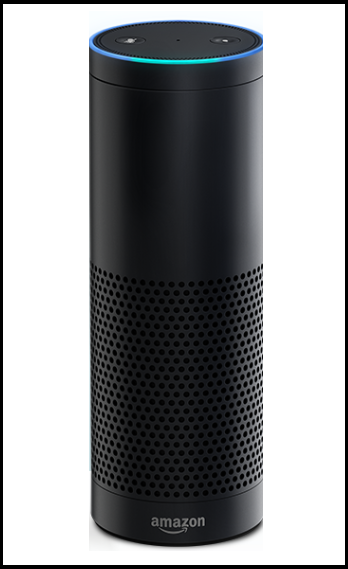 Anyone who browses Amazon.com as much as I do, probably saw a new product they introduced a few months ago called Amazon Echo.  It's a voice-activated speaker system that plays music and answers various questions. The range of what the device can do is really amazing, but I'll get into that later. Echo is still in its Beta stage and interested customers had to request an invitation to purchase. I was one of the lucky few to receive an invitation and while the device is still not available to the general public, interested Amazon Prime members can request an invitation to purchase.  Because I've been using the Echo for a good six months now and it's a one-of-a-kind device that most people haven't gotten to use for themselves yet, I decided to do a review of it for all those interested. To get things started here's a quick list of what the echo does:

-Play music from your Amazon library, iheartradio, Tune In, and Pandora including very odd and specific music genres. Ability to connect and play music from any bluetooth device as well.
-Give forecasts, news briefings, and traffic for your area.
-Calculate math questions, give measurement equivalents, and give sports scores
-Set timers and alarms. Add items to your shopping and to-do lists
-Give information from a Wikipedia page.
-Tells jokes, answer silly questions, and my personal favorite- recite words verbatim.

I'll start off by saying the sticker price on the Echo is $200. Because I purchased it during a development stage I paid $100, which is a crazy good value. And now if you request an invitation and you're a Prime member it's $150- still a great deal. Even at $200, the device is worth the price in my opinion.

1) Lazy people rejoice (and everyone else)!
It's really convenient to have a questioned answered instantly just by asking. You'll soon find yourself trying to use vocal control on your other devices and getting really frustrated when you can't. I'm the type of person who has to look something up as soon as the question enters my mind, so the Echo has saved me from pulling out my laptop just to look up a simple answer on numerous occasions.

2) Theme Music
One of my household's favorite uses for the echo is to use it as our soundtrack.  Whether it be to play Cat Scratch Fever when my cat knocks a glass off the counter or to play the Mission Impossible Theme when sneaking around the house, the Echo makes you feel like a movie star with your own soundtrack. Even if the song isn't availabe from Amazon's free vast public library, it can play a sample of almost any song.  It's also handy if you feel the need to listen to a certain song immediately or are talking to someone and want to reference a song.

3)Is it going to rain today?
Echo gives you the temperature and weather for your exact location. When you live in Florida this is a very handy thing.

4) A chef's best friend
Having the Echo in close proximity to your kitchen is a great way to use the device. Whether it be to set a timer or tell you how many tablespoons in a cup if you're bad at estimating like me, the Echo has made cooking so much more convenient. If you realize you're out of something you can have the Echo add it right to your shopping list.

5) Settling Arguments
I live in a house full of stubborn people. Many friendly but passionate arguments errupt over the silliest things (like whether Idris Elba is British- he is for the record) and now those arguments are quickly settled by the Echo.

6) Freaking Out Visitors
"Help Me" is my favorite thing to have the Echo recite when I have company.  In addition to being voice activated, the Echo has a handheld remote. I keep the remote in a separate room and can control it by speaking into the remote. So every time we have company I try freak them out by either having the Echo speak directly to them or playing really creepy songs out of nowhere (like Every Breath You Take by Sting)

7) A Variety of Music in Seconds
Having a household with unique tastes that often change is no problem for the Echo. If someone is listening to Blues and I want to change it I don't have to go through the work of changing out iPods or CDs. I need only ask the Echo to play a different station or song.  If there is something that I want to listen to on my phone or any Bluetooth device, I can just connect and play it right through the Echo but thanks to their exclusive library I hardly ever do.

8) The App
You will definitely want to download the correlated Echo app. If there is a question that the Echo can't answer, it will do a Bing search and send the results right to your phone. It also shows the artist and song title currently playing if you're listening to music. Your shopping and to-do lists appear right on the app so it eliminates the need to bring a paper list to the store. You can just pull up the your phone and can check off items as you add them to your cart. You can also calibrate the echo right from the app to respond more specifically to your voice.

It's hard to come up with any cons because there's no device like it to compare it to, but there are some disclaimers I have.

1)Need
The one obvious con is that this is not a necessity. So for the price of $200, even though it does a lot of cool stuff, it's really not something that's vital to your life. The Echo is basicially a really cool accessory. It does make a lot of things in your life easier, but you can survive without it.

2)Creepy
Some are creeped out by the fact that it's on all the time and responds when you use the wake word "Alexa" and yes, there have been a couple times where someone was talking and said something that sounded like "Alexa" and the device responded, but you can always turn the mic off or unplug it if you start to feel like Big Brother is watching you.

Some of the cons of the device in its first stages (ie the inability to play music from your phone/iPod) have since been resolved by updates to the Echo which is one of its best features-the ability to change. I've never had any tehnical issues with the device even though it's still in development.


Conclusion
I've become quite attatched to this device.  It's like part of my family now and I affectionately call it by its wake word "Alexa".  I can imagine life without the Echo, but it would be a lot more difficult.

Overall I'd give the device 5 out of 5 stars. Everyone I've ever shown the device to has marveled at its capabilities.  It makes life a bit more fun and a lot easier. I'm not endorsed by Amazon in any way, but I seriously love this device and think it's a great value.  I have seen no major flaws, which I find really impressive considering it is still in development.

For more information on the Echo or to request an invitation click here.