Welcome friend and future friends! We're another week through My Unfortunate Boyfriend. What are you thoughts so far? Find mine at the bottom after this short recap. 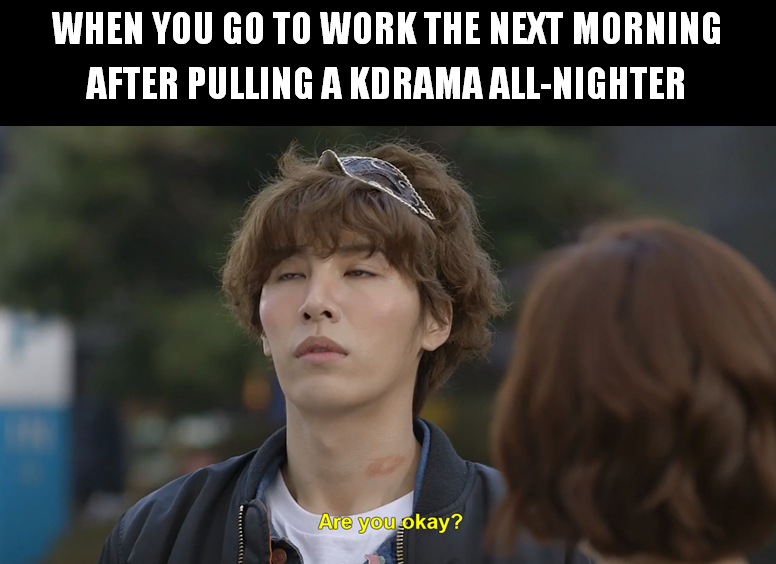 In this episode it's clear that Mr. Unfortunate has now fallen for Ji Na. After her CPR "kiss", he gets all hot and bothered and takes off from the magic show. Ji Na chases him and feels bad that he's hurt. She goes to get him some medicine, when a motor bike comes straight at her.  Mr. Unfortunate pulls her off the street and into his arm in the most romantic way possible. Then he yells at her and tells her that she needs to keep herself safe. Where has this Mr. Unfortunate been? This is what I've been waiting for. I think he now deserves to be called by his name, Tae Woon. 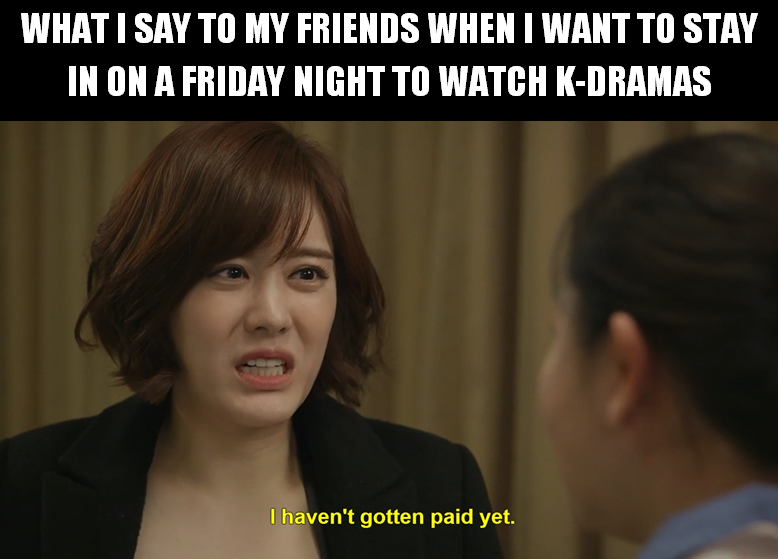 Hee Cheul runs into Ji Na after the magic show and invites her out to dinner. She's excited, like super excited.  Tae Woon overhears and is super bummed.  He even has a minor freakout in the grocery store, thinking he hears Ji Na's name everywhere.  When Ji Na gets to the restaurant she realizes it was a dinner for the whole office-embarassing! But she plays it off well as always. The office ladies bring up Ji Na's college, remember the spider on her resume made it look like she was from a prestigious one. And Ji Na has to lie and say she knows one of the classmates who would have gone to school with her who is now a celebrity. I have a feeling this will not be the last time this issue comes up. 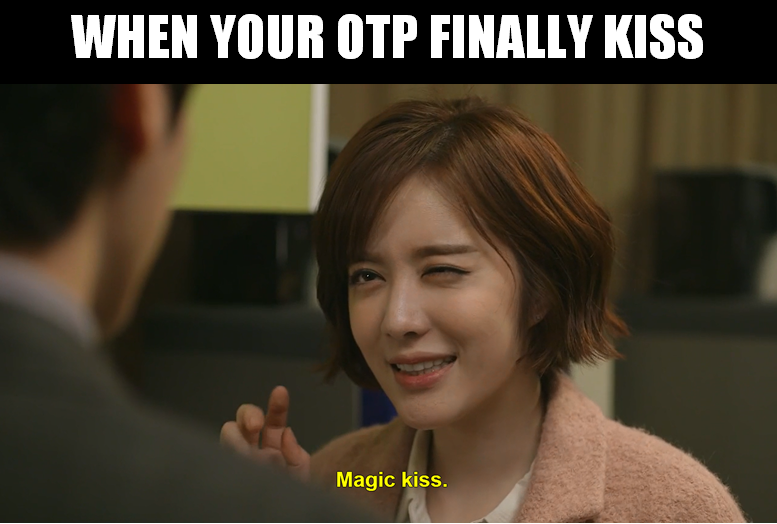 So the office ladies learn that Hee Cheul loves a woman who can drink it's game on and suspiciously Hee Cheul does not drink.  Did he do it on purpose just to get all the ladies drunk. I don't know it seems sketchy. Anyway Hye Mi and Ji Na go head to head. The result- Hye Mi hilariously passes out, but....also gets the ride home in Hee Cheul's car that he had first offered to Ji Na. So is it a win or a lose? Ji Na seems to be unaffected by the drinking until Hee Cheul leaves and we find she is quite drunk herself.  She's dancing and skipping in the street. Meanwhile Tae Woon has lost a bet of sorts that requires him to go around town for two hours in a bear costume. Also he's not allowed to speak. He sees Ji Na in the street and heroically goes to pull her out of the street again.  Not having the clearest judgement Ji Na is super excited to see the bear and spends the whole night going around and having fun with him, which he loves! But Ji Na never knows that it's him. She even reveals that she's so ambitious because she wants to provide her mom with a good life because her mom was so good to her. Ah, her motives were pure after all.  Then after all their fun Ji Na passes out and he lays her in a cart with a blanket and covers her in cardboard and newspaper to keep her warm.  He stays there while she sleeps and in the morning he goes to get them coffee and comes back to find the cart gone.  An old man was wheeling away the cart, thinking it was only full of recycling and that's when Ji Na wakes up. 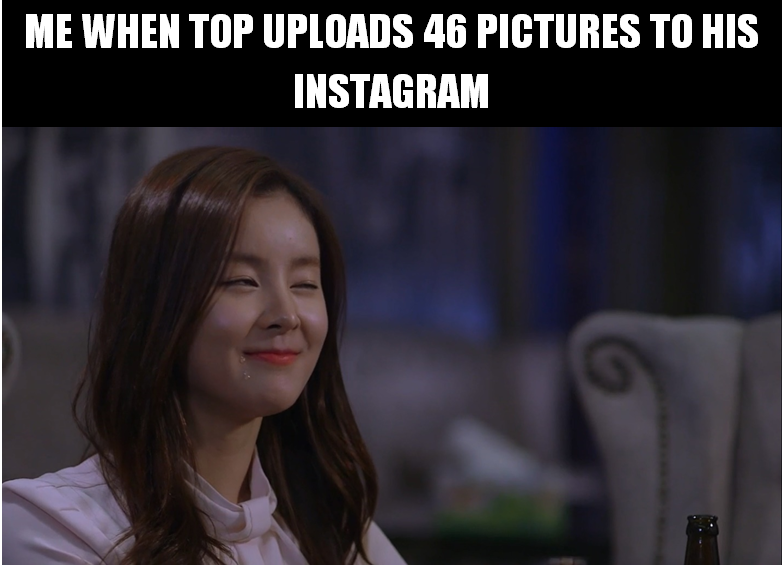 She rushes to work and makes it there just on time, but she's still wearing the clothes from last night which of course Hye Mi immediately points out. She lies and says she stayed at a nearby hotel because she was too drunk to go home. If I'm correct this is the first lie we've seen from Ji Na where she proactively decides to lie on her own accord- although if she admitted she slept outside in a cart she may have gotten fired for being a generally reckless person. 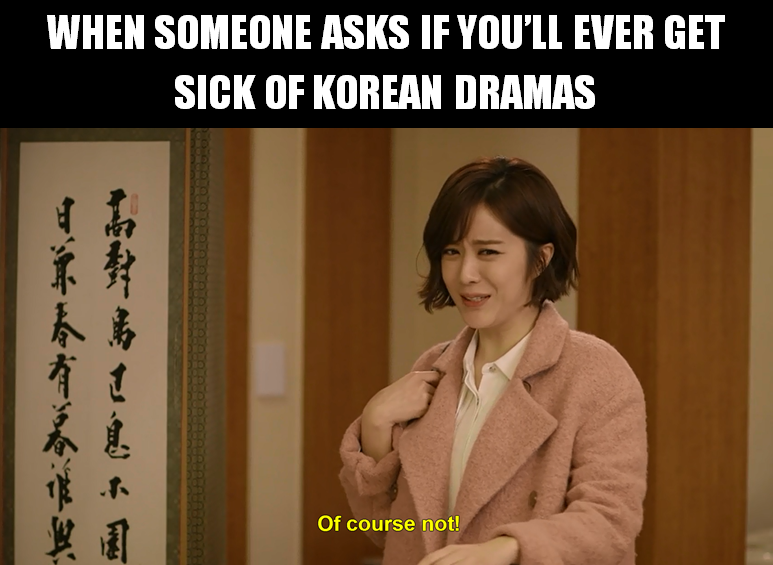 So one of the manager ladies is complaining about how nobody ever wants to do this task that needs done every morning. Ji Na and Hye Mi, both being eager to look like duitiful employees, volunteer eagerly.  And the task ends up being...getting flowers from Mr. Unfortunate's shop every morning.  So Ji Na goes there to find Mr. Unfortunate and a teenage girl and it appears that they're in a compromising position. Ji Na does not hesitate. She runs right up and punches him in the face.  That's the kind of character I can get behind, but it was a little sad because he was so excited to see her. And...that's where the episode ends.

So there's the recap. Here are some bonus thoughts:

-Ji Na seemed to be a little shaken by Tae Woon's heroism, didn't she?

-Okay, Hee Cheul, that was a jerk move calling out Ji Na in front of everyone when it was clear she thought it'd just be the two of you. Luckily, she's quick on her feet. And I feel like you're leading her on. You didn't deny it was a personal request that she not use the "magic kiss" anymore.

-Also, really Hee Cheul?  If you tell a group of women that you like a woman who can drink and you're a wealthy, attractive man, what do you think is going to happen?

-Hye Mi's face when she passes out is one of my favorite things of all-time.

-Again, Hee Cheul, is your car's back seat broken? You can't take both women home? I kind of thought Hye Mi might have been faking it. Still not convinced she wasn't.

-Man, Hee Cheul is getting my wrath today.  If you've just seen a woman drink copious amounts of alcohol, no matter how fine she seems, don't let her find her own way home.

-Ji Na is a blast whens he's drunk. I've never seen such a fun drunk in all my life.

-That scene with Ji Na and Tae Woon in the bear suit is magical.

-Why did Tae Woon think it'd be a good idea to put her in a cart and cover her with garbage?

-I was really uncomfortable when it looked like Tae Woon and that girl were in a compromising position. I'm glad that Ji Na punched him.  She is seriously my hero.

So those are my thoughts on Episode 3. Stay tuned for thoughts on episode 4 coming soon!
at April 23, 2015