Welcome back friends and future friends! Trying to get these recaps out a little earlier this week so you can follow along with my DramaClub discussion even if you don't have access to watch the episodes. Look forward to episode 6's recap coming to you later tonight. As always I've thrown in some bonus comments that my big mouth couldn't help but say and this week there were many ;)

Okay so we left off last week with the revelation that Tae Woon was most likely the Dr. Seed that Ji Na was looking for. He was, of course, and he was totally super excited to see Ji Na. Ji Na understandably was not so excited.  After all, she's trying to limit their encounters as much as possible, but he keeps showing up. Then it starts to rain and Ji Na is trying to take cover and run away, but has blisters from looking all over for Tae Woon and is wearing heels. He pulls out another one of those macho moves and covers her with her jacket and then lifts her onto his back to give her a piggyback out of the rain. She is uncharacteristically at a loss for words at his chivalry.  I like their interactions during these moments. The tables turn and he takes charge and she just goes along with it. Ji Na goes to leave and Tae Woon offers her a ride. She can't really turn him down because she didn't drive there and they still have business to discuss. 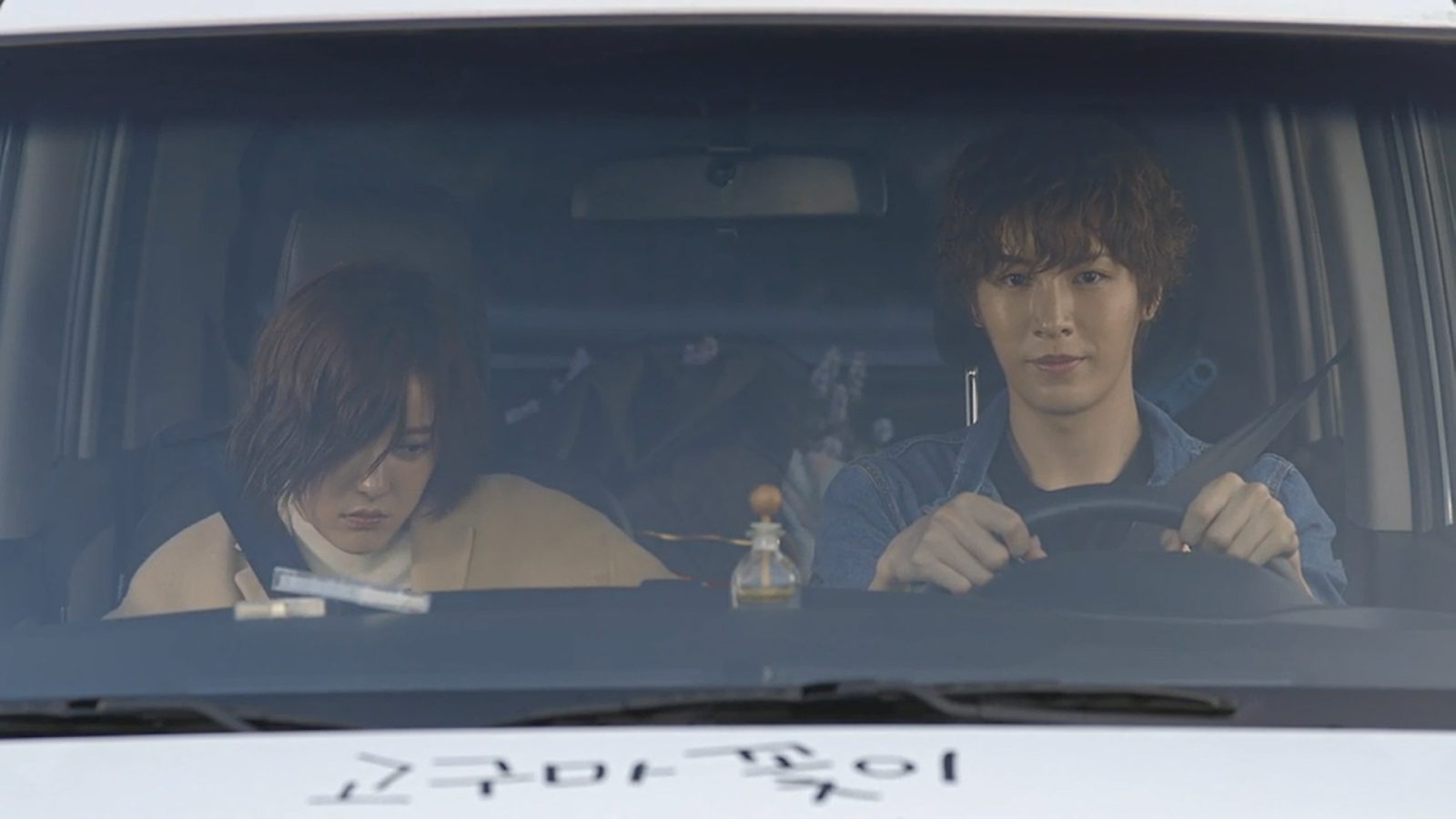 So they start heading back They briefly discuss work and don't get much accomplished. Then he asks her not to tell anyone he's Dr. Seed and she says she doesn't want anyone knowing they were together anyway. She sets her GPS for him and tells him to follow the directions exactly. 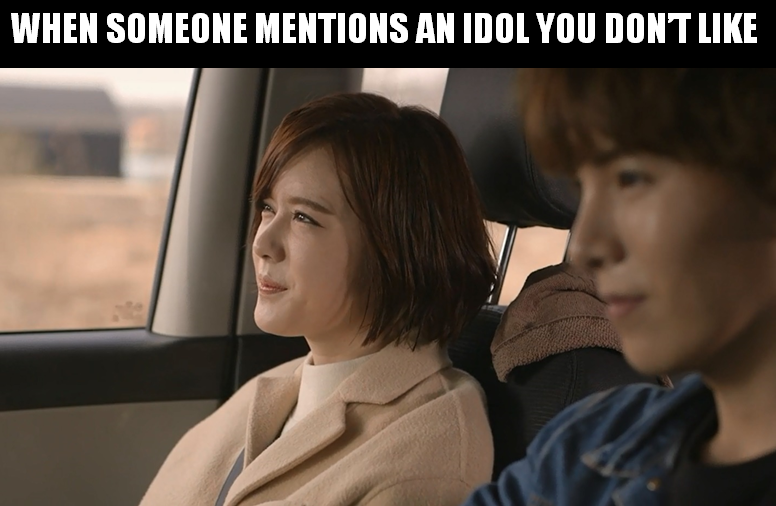 Meanwhile at the office beautiful Hee Cheul is working late and guess who else? Oh, it's Hye Mi, big surprise.  She asks him to take a coffee break and they go and chill out on the balcony. She asks him out for dinner and he only thinly veils that he is not at all interested, but she doesn't seem to get it. 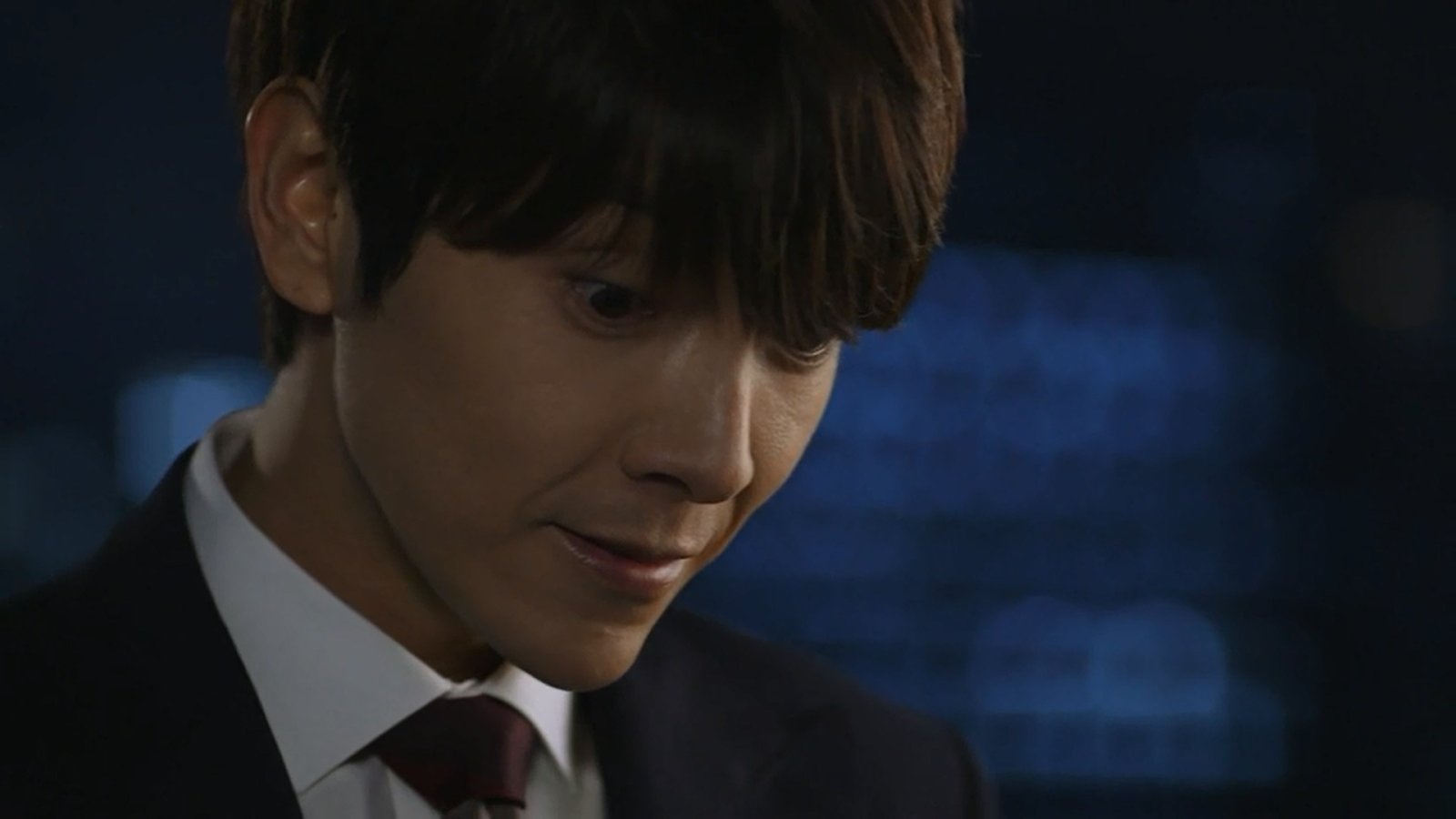 So back to Ji Na and Tae Woon. She's asleep by now and he's still driving. It's clear he thinks they're somewhere they shouldn't be, but remembers her instructions to follow the GPS no matter what so he keeps going.  Some time later Ji Na awakes and it's morning and finds that they arrived at the ocean. She had selected the wrong city on the GPS and because Tae Woon did what she said without question he followed the directions there.  Then it turns out the van's battery died while Tae Woon was waiting for Ji Na to wake up. It turns out they need a new battery and it'll take two hours.  Ji Na starts to freak out and doesn't want to eat while they're waiting for the car's battery.  Tae Woon steps in and gets stern with her telling her that she has to eat because he doesn't want to see her hungry.  She gets quiet again and follows him into town. 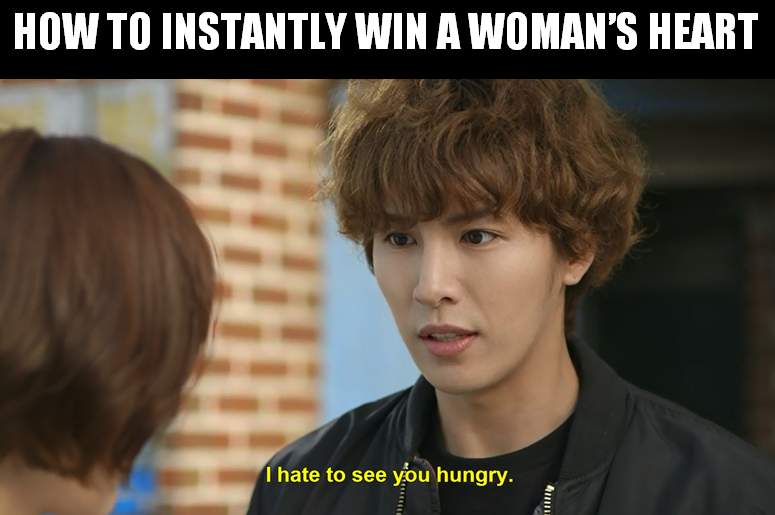 To Ji Na's dismay the restaurants only serve spicy fish stew, which she says she hates more than anything else in the world.  She ends up revealing that she has a vast knowledge of seafood giving a glimpse into her past, but she lies and said she has a lake house. When will the lies end, Ji Na?!?  Anyway, Tae Woon's having a little difficulty with his food so she takes and cuts his fish for him in a genuinely kind moment and he has a flashback of his mother doing the same for him as a boy. He gives her the look that says he has never seen anyone more lovely in his life.  They leave the restaurant and she's still limping because of her blisters and heels so Tae Woon buys her some ugly, but comfy shoes. Ji Na gets back to the office and overhears Hye Mi taking the (other) office ladies to lunch.  They insinuate that Hye Mi is kinder and more clever than Ji Na. Ji Na scowls- she knows where she stands now.  At lunch the ladies are talking about how to win a man and Manager Oh explains that she got her very attractive husband by cooking 12 side dishes. Hye Mi's eyes sparkles. Hmm, wonder if she's going to try it.

We get to catch up with the chairman who's off somewhere fishing. We find out that a "Senator Yoon" is trying to get enough shares to be the majority shareholder of the company and it turns out that he has a daughter that now works there who he's trying to get to marry Hee Cheul. Hello, Hye Mi! Also, that explains a lot.  The chairman's assistant says that either way Hee Cheul will become the new chairman either as the chairman's son or the senator's son-in-law. The chairman has an odd sort of look on his face, like he doesn't agree, or maybe he just feels guilty that Hee Cheul has to deal with that pressure.

So now that we know that Hee Cheul's facing the pressure, he gets a call from the Senator. He lies to him and say he didn't know Hye Mi was working late the other day otherwise he would have eaten dinner together and says that going forward he'll make sure she eats her meals. This leads him to call Hye Mi and tell her that she can take him out for dinner that night. So guess what? She cooks for him. At least she tries. It turns out that she's horrible. If I've learned anything from Korean dramas it's that about half of the Korean women can't cook, but all chaebols can. Hee Cheul offers to help. She turns him down and eventually they go out to eat instead.  Hye Mi tells a little about her background and how she wants to accomplish things on her own without her dad doing it for her. She insinuates that this includes winning Hee Cheul over, which makes him feel a little guilty, because it seems he has no genuine interest in her apart from appeasing the Senator. Back at Ji Na's pad, her creepy friend has moved herself into Ji Na's house and while Ji Na tries to kick her out the girl threatens to call Ji Na's mom so she has no choice but to let creepo stay. Although I think it's good for Ji Na to have somewhere there to support her. She needs someone on her side like I've been saying, especially since the girls at work have clearly chosen Hye Mi's side (the wrong side). So the next day at work he planning team has a meeting. So basically Ji Na is left by herself and goes to eavesdrop and the door ends up opening and she falls to the floor in the meeting room. And...that's where the episode ends. We'll have to see what happens in the next episode That was the recap and here are my thoughts. There are many this episode and they are quite opinionated.

-Tae Woon is crazy stupid in love.  He went from zero to sixty. Oh, his poor heart isn't going to be able to take it. The only way this is going to work is if Ji Na falls equally in love with him. I mean, I love Hee Cheul, but I wouldn't feel emotionally responsible if I didn't root for the Unfortunate couple to succeed.

-I absolutely am in love with the character trait that Tae Woon displays where he can be all airy and fancy free, but when it comes to taking care of Ji Na he is very confident and assertive. This is such a unique K-drama character and while I didn't completely understand him in the beginning, he grows on me each episode.

-I knew that GPS situation was not going to go well, but there are far worse destinations than the ocean.

-The Chairman seems like he has a secret, more than one.  Why do I feel like he's going to try to make Tae Woon CEO? I hope that's completely off-based because he would be a horrible CEO.

-I used to feel sorry for you, Hye Mi, but now I just feel sorry for Hee Cheul. Take a hint, girl. He does not like you! He just feels obligated to spend time with you because your dad's got a lot of power. Just look at the faces he makes when he's talking to you.

-I would never in a million years eat a food called "Busted Raven". Maybe because that's my sister's name, or maybe because it sounds hella nasty.

-Am I the only one who doesn't think it's romantic when a girl reminds a guy of his mother? Guys who want to be mothered give me the creeps.

-I love that Tae Woon feels bad that the shoes he got are ugly.

-Apparently salad bars are a fancy place to eat in Korea. Lol.

-Omo! When Ji Na tucked her friend in, that was adorable. Under the hardened facade she really is quite sweet.

-I really hope Ji Na pulls off sprawling onto the floor like that. She's pretty good at that type of thing and now would be the perfect time to take advantage of that skill set.