This is a true story. The names in this story have been changed to safeguard my friend's pride.


So recently I went to pick my friend, let's call her Lily, up at the airport.  I am standing there at the gate, checking my email,  and I hear her yelling my name. I look up and Lily is waving energetically at me as she comes out of the gate and I wave back with equal enthusiasm.  We hug and catch up with need to know information for about a minute or so.  Then Lily's face turns lily white.

"My ex-boyfriend is standing over there," she says. Now I am acquainted with all of Lily's ex-boyfriends and I haven't noticed anyone.

"Where?" I ask as I begin scanning the airport crowd.

"Over there," she whispers, motioning a mere twenty feet away. Sure enough there is Lily's ex, let's call him Blake, standing along with a group of people, holding a bouquet of balloons.  How long had he been standing there? I hadn't even noticed him. Thankfully he seems completely oblivious to us and quite into the conversation he is having with his group, but Lily turns frantic.

"I've got to get out of here!" she announces. Now I'll also mention that Lily is big on airport fashion and for her a flight on a plane is not complete without a pair of pumps. So she clacks hurriedly away in an attempt to circumvent Blake, but as she does this his group begins to move as well. Lily is so focused on getting away that she doesn't notice this.  Now the L-shaped pattern that Lily was making and Blake's group's straight path were set to intersect. I've demonstrated on the diagram below. 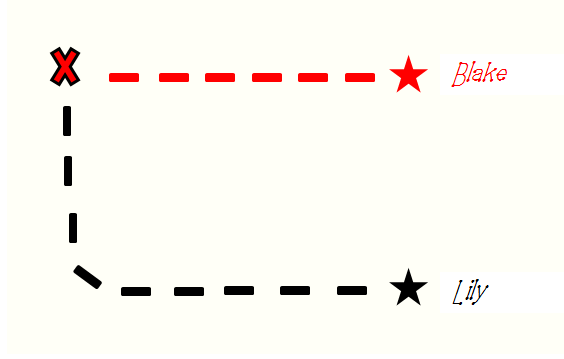 At this point I've stopped and tried to get her attention because I can see exactly where this is going. However, Lily is in her own little world so I just stand there and watch.  As the two parties get closer, Lily, who is holding her iPod, drops is out of nervousness. It skitters a few feet across the ground. Lily stops to pick it up and Blake's group passes right in front of her.  Blake walks on by without even glancing at Lily. Now being me, I can't hold the laughter in any longer. Lily is not amused.

In an attempt to make an escape she nearly literally ran right into her ex and definitely drew more attention to herself in the process.  Now the funny thing here is that Blake most likely had seen her before she saw him and was making the decision to ignore her himself. Lily and I weren't exactly being quiet as we greeted and the fact that he didn't even glance at her as he walked by only a few feet away was a little suspicious. The whole scenario played out just like a scene from a movie. However, I tried to remind Lily that it would have been a lot worse if they had made eye contact and had to acknowledge each other in that awkward situation.

So as a word to the wise: if you are in public and you see someone that you want to ignore- stay low and move stealthily.