So Sensory Couple is over and with it the weekly anxiety and anticipation of what was going to happen next with the barcode killer.  As promised, friends, I'll now give my thoughts on this crazy drama without any real spoilers. 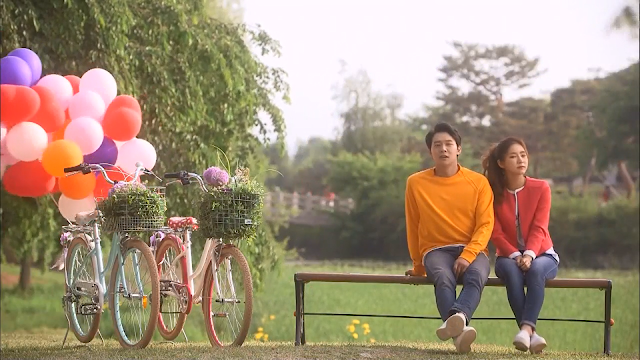 
This drama gets high marks in my books. It had me intrigued pretty much constantly from start to finish.  The only time I even waited a day to watch the next episode was when I didn't think I could emotionally handle the suspense that day and in my book that is a sign of a good drama.

-Moon Gak and Cho Rim's chemistry. It was magical.  It was hard to believe these actors didn't know each other before the drama. Strangely, their kisses were awkward, but every other one of their interactions was pure believable romance.

-The concept.  The concept was originally what made me weary of this drama. I mean, a girl who can see smells? Definitely sounded cheesy, but it actually was a really fun plot element.  A team of kind and lovably goofy detectives (who are smarter than they seem) enlists Cho Rim as part of their crime-solving team in order to solve the case of a notorious serial killer whom it turns out Cho Rim was more involved with than she ever knew.

-The Villain. Some dramas have multiple villains, but this one only needed one. And he was the perfect villain. Pure evil. Bone-chillingly so. He was a powerful enough villain to take on a whole cast of really ethical good guys. That should tell you something.

-The kisses. As I mentioned before, they were strange. They were mostly a very awkward series of pecks. Unusual and counter-intuitive to the chemistry the characters shared most of the time.

-Multiple Confrontations. The only other thing I didn't like was there was a tinge of repetitiveness in the number of times Moo Gak went to visit the suspect at his home to try and badger him.


Resolution: 90%
-Resolution of a drama is a big factor to me in how I see the drama overall.  The drama did a great job of tying everything up, but there wasn't quite the intimacy I'd have liked to see between the leads as the drama was resolved so I'd say there was 90% of a resolution for me.


I'd recommend everyone give this drama a watch. I will definitely be adding it to my mental list of "good dramas".  Especially if you're a fan of Park Yoo Chun. He's in prime form in this drama.  So there's my review. Anyone else see it? What was your opinion?