Hey friends and future friends! I hope you all had a splendid week. We're getting close to the end of this series, can you believe it? Feels like we just started. Well let's get right into it and I'll add some of my own personal brand of commentary at the end.

Last week we ended with Hee Cheul coming to visit Ji Na at her place after she ignores his calls.  She's shocked and embarrassed to see him. He forces her to get something to eat with him and she's still in her sweaty workout clothes.  Gross! Ji Na is so confused and embarrassed that she hardly says anything the whole time and he does most of the talking. He says that he still likes her even though she lied. He tells her that he is going to make her smile more often and that he doesn't like to see her cry. 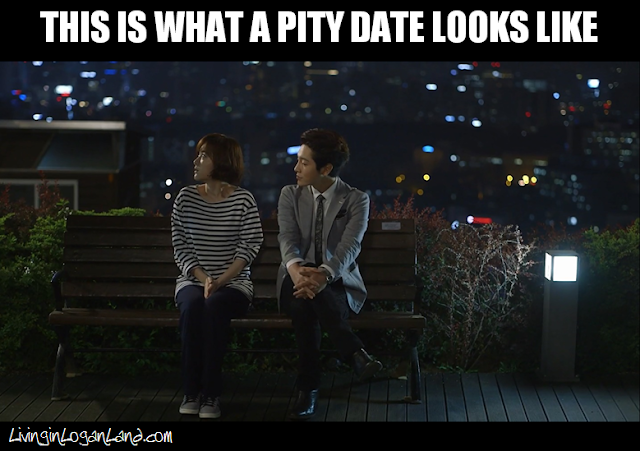 Tae Woon has gone to visit his uncle, the Chairman, who is not doing so well health-wise. His assistant tells Tae Woon that the chairman refuses to go to the hopsital but he thinks if Tae Woon agrees to participate in the competition for CEO then the Chairman will agree to go to the hospital.  Tae Woon doesn't answer, but you can tell he's considering it. 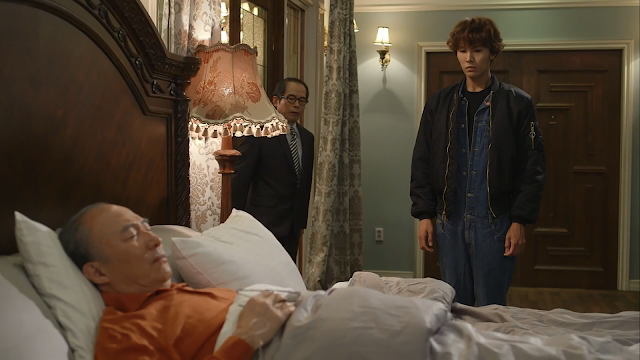 Hee Cheul walks Ji Na home and as he leaves we see someone taking pictures of the two of them. Who's behind this- Hee Cheul himself? The Senator?  Those were my first two thoughts, but it's actually Hye Mi.  The Senator's spy brings her the pictures, but then the Senator finds out that Hye Mi is spying on Hee Cheul. The Senator knows Hee Cheul's spending time with Ji Na is part of the plan and he tells his spy not to listen to Hye Mi anymore because he's worried she's going to mess things up. 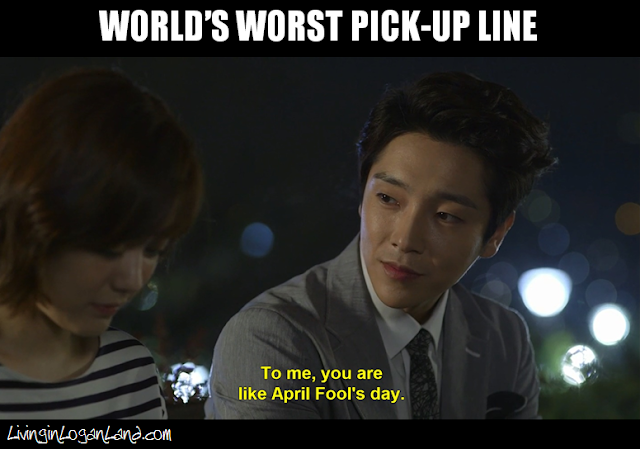 Tae Woon goes home where his friend, the Weirdo, and the strange neighborhood girl come in with pizza and snacks to have a party.  They discuss their futures and it turns out the neighborhood girl has auditioned for a singing show and made it in-that's why she hasn't been around lately. And Weirdo has decided he's going to join the circus and give up on the bar exam. Mal Sook wants to be proposed to by a guy hanging upside without a safety net.  He tells Tae Woon that he needs to prepare a special proposal as well or he'll be nagged for the rest of his life. 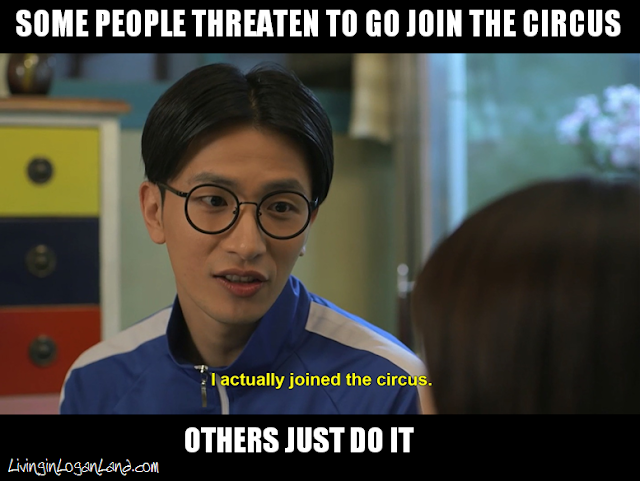 When Ji Na gets home from dinner she's initially annoyed with Mal Sook for telling Hee Cheul she lived there.  Mal Sook can tell Ji Na is on the fence about Hee Cheul and she chastises her for being so finicky.  Ji Na confesses that she has some real feelings for Tae Woon.  Mal Sook warns her to stop her feelings for Tae Woon and turn toward Hee Cheul before it's too late.  Just as Ji Na was getting close to a decision about her heart, Hee Cheul's confused her even more. 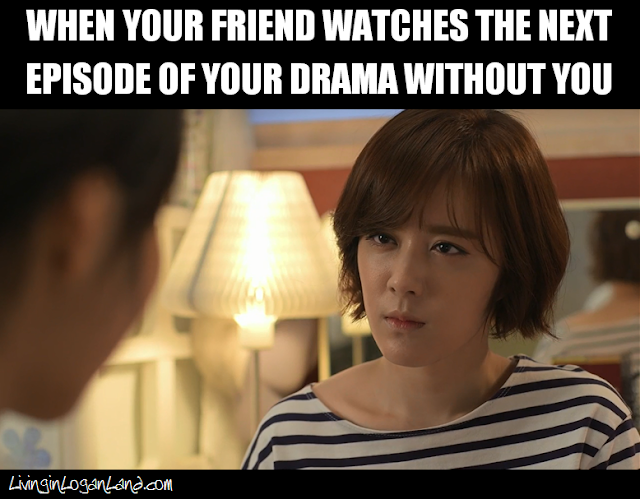 Ji Na goes to work the next day to find everyone packing up their stuff.  Apparently they're all moving to a new office and Ji Na was the only one who didn't know because she didn't read the bulletin board.  Meanwhile Tae Woon is describing a custom piece of jewelery he wants designed to a friend that works in some sort of manufacturing field it appears. He's designing a ring...hmm, wonder what that's going to be used for. As he's going back home he and Hee Cheul come across each other.  Hee Cheul tells him he should forfeit the race and not even bother trying to be CEO. 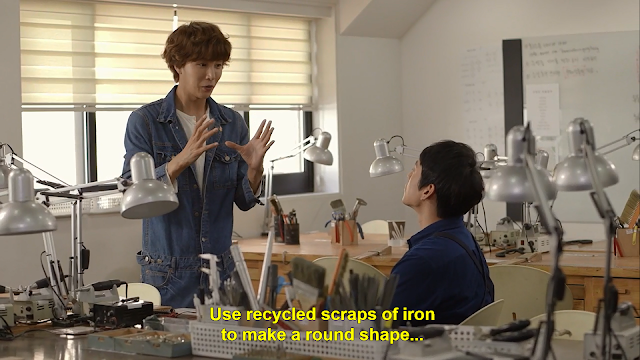 Back at the office Ji Na seems kind of sad about moving to a new location.  Her and Hye Mi have a very melancholy goodbye and Ji Na thinks it's odd because it feels like a final goodbye.  Her new teams goes to their new office and shares a meal together.  Oddball and Mr. Eccentric are being very sweet and flirty with their lady friend counterparts and Ji Na looks on them a bit of sadness.  It's hard to say for sure what she's thinking, but personally I think she's missing Tae Woon. 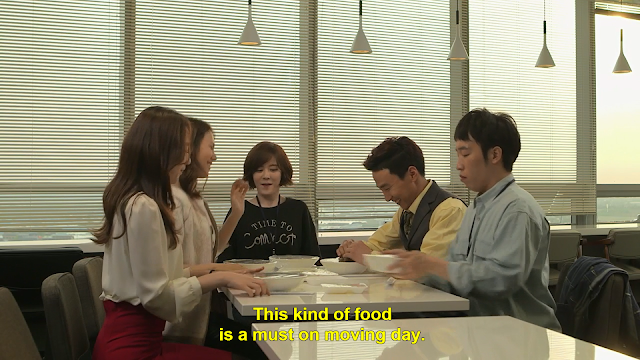 On Ji Na's walk home that evening she's being followed. We can see that it's the Senator's spy, but she hasn't met him yet.  She thinks she's going to be attacked, but then he walks right by her. I'm still nto sure what was doing. Is he still spying on her? For who this time? When she enters her apartment all her stuff is gone and there's a note from Mal Sook with an address.  Understandably she's confused and so she goes to the address where she finds Mal Sook and all her stuff in a significantly nicer apartment.  When Ji Na interrogates Mal Sook she finds out that Hee Cheul insisted on moving them because he didn't think they were safe. 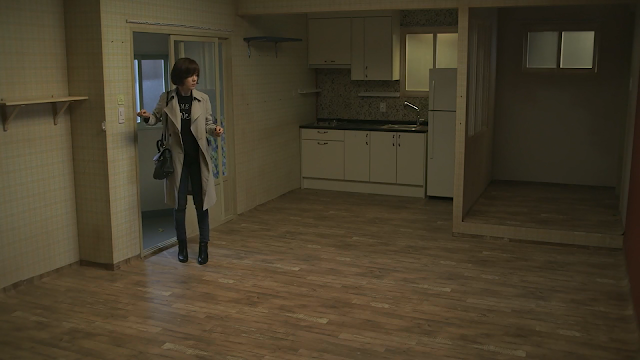 Hee Cheul gets a call form Ji Na and she starts to ream him out. He says he'll come meet her, although he seems a little nervous. Ji Na's a bit scary when she's mad.  She doesn't like the display of what she thinks is cockiness. She's incredibly independent after all.  Hee Cheul explains that it's because he wants her to be safe and the dark alleys where she lives makes him nervous. Ji Na tells him to return it to the way it was. And for the first time we see Hee Cheul break his calm demeanor and go into macho mode.  He tells her very passionately that he'll let her move when she finds some place safe.  I love this side of Hee Cheul. Where has he been this whole drama? Ji Na is speechless. She sure has a thing for protective men. She had the same response when Tae Woon was protective of her. 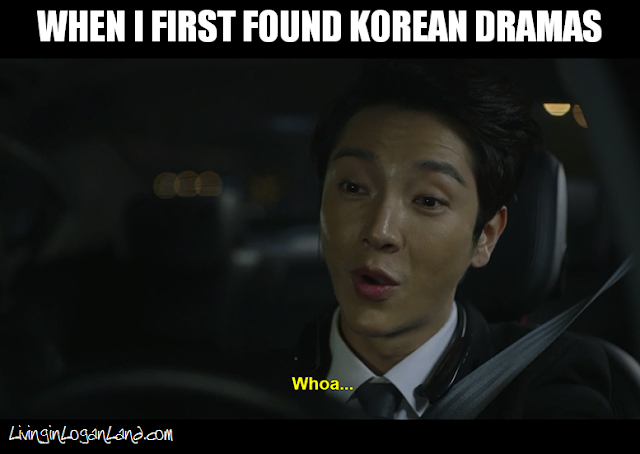 Hye Mi has gone to visit Tae Woon.  She reveals that Ji Na "lied" about her education to get the job. Although, I don't think it's fair to count a squished spider obscuring her resume as an intentional lie.  Hye Mi tells Tae Woon that if he beats Hee Cheul in the competition for Chairman that she won't tell anyone about Ji Na.  Tae Woon asks why she's trying to help him beat Hee Cheul and she tells him that it's because Hee Cheul won't need her if he wins and so she's trying to keep him for herself.  Tae Woon seems torn. When Hye Mi leaves Tae Woon sees a picture of Ji Na as a kid attached to her resume and realizes it's the same "boy" who helped him get his kite when he was a kid and it only makes him more fond of her.

The episode ends as we watch Tae Woon ceremoniously pack up some of his more childish belongings into a box while wearing a suit. He leaves the flower shop with a sense of determination.

Okay, so that's what happened and do you want to hear what I have to say?

-I don't think I've ever seen Ji Na as quiet as the scene between her and Hee Cheul at the restaurant.  She didn't say more than two words at a time.  That just shows how conflicted she is. She doesn't even know what to say, which is completely uncharacteristic of our quick-witted heroine.

-Why does Hye Mi have Hee Cheul followed when he's already told her he's meeting up with Ji Na?  It seems kind of pointless.

-I was honestly expecting Hye Mi to go crazy on Ji Na and horribly sabotage her somehow. I think I would feel more easy if she had. Now I'm just nervous as to what Hye Mi's planning. Although now she seems more hurt than jealous so maybe that why she's changing tactics.

-Tae Woon and his friends party just how I like to -with pizza! You can't go wrong!

-Mal Sook has some weird proposal demands. Hanging upside down without a safety net? Yet Weirdo doesn't seem put off by at all; he's actually kind of into it.

-Mal Sook may seem shallow by chastising Ji Na about liking Tae Woon, but she's actually a good friend. Ji Na was the one who said she wanted someone successful so she could be a person others envied.  Mal Sook was the one who chose love over money .  Weirdo has no money and no job.  Well, I guess he does now since he's joining the circus.

-You're telling me everyone in the office has known they were moving, but never once talked about it? Not even in passing. That's a bit strange. Also, what's the point in moving offices. I'm still unsure.

-I'm really nervous that Tae Woon is going to propose. Although I do want them to be together, I feel like it's waaaaayyyy too soon in their relationship-even by Kdrama standards. Especially because they're not really even dating.

- Why do Hee Cheul and Tae Woon stop in the middle of an intersection to have their manly stand-off/intimidation. That's just dumb.

-It might just be me but I think Hye Mi's going to miss Ji Na. Even if she hates her sometimes, I don't think even Hye Mi can deny that Ji Na is loveable.

-I would watch an entire drama with just Oddball, Mr. Eccentric, and their ladies. Can someone make that happen?

-The fact that Hee Cheul moved Ji Na without her permission absolutely grossed me out. It was by far one of the creepiest thing any second male lead has done in a Kdrama.  I didn't find it romantic at all, but really controlling.

-It's really ridiuclous that they can even accuse Ji Na about lying about her education when the resume they have (which she gave them) clearly lists the schools she actually went to. It was Hee Cheul's fault for being so uptight that he continued on with the interview even though there was a dead spider covering half of her resume.

-At first I thought Hye Mi was asking Tae Woon to become CEO to test Hee Cheul's affection, but it turns out she's just manipulating him instead. Nothing says love like manipulation.

So that was was Episode 13. Watch out for Episode 14 some time between now and tomorrow night. You can find the rest of my recaps for this series below.