Hello friends and future friends! Can you believe we're already nine episodes into My Unfortunate Boyfriend? So crazy.  So things are really starting to get interesting.  Let's see what this episode had in store for us. 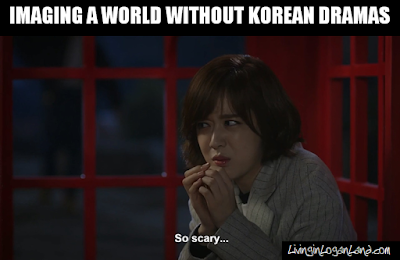 When we last left off our heroine, Ji Na, and our hero, Tae Woon, had locked their phones/keys inside the van and were stuck at an old, abandoned amusement park in the middle of nowhere. It's night and it's getting cold, so Tae Woon goes around and collects random things to keep them warm.  He finds a blanket, hat, and slippers for Ji Na and then makes them a fire.  They entertain themselves for awhile making shadow puppets and pointing out constellations. All in all they don't seem to be having a bad time so far. Oddball and Mr. Eccentric are still at the junkyard helping out the Dr. Car and Mr. Eccentric calls to give Hee Cheul his report. He tells the director that Ji Na and Tae Woon went out together and have yet to come back. Hee Cheul is hella jealous. 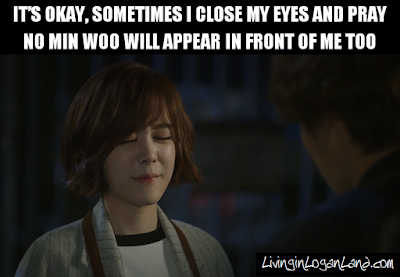 Back at work, Hye Mi and her girl posse crew go to an all night bookstore/cafe to brainstorm for their next idea.  They pig out on junk food and Manager Oh starts to have stomach pains. Is the baby coming early? All five girls take her to the hospital. So cute that they're all helping her! 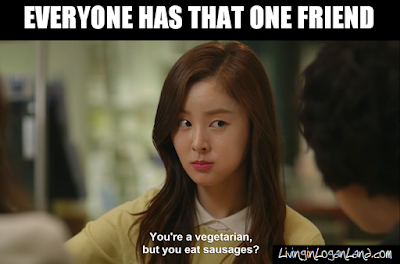 At this point the fire has died and Ji Na and Tae Woon are getting cold. Ji Na is huddled in an old phone booth and asks Tae Woon to come in there with her (for warmth, of course!), but he doesn't until he sees how cold she is. He takes off his jacket immediately and wraps her in it and then holds her.  Okay, there's absolutely no question that he is the world's best caretaker.  She falls asleep and Tae Woon realizes he can't see her like this any longer.  He goes back to the van with a brick to break the window. Once there he has a flashback to him as a child at the scene of a car wreck, crawling through broken glass.  We already know his parents died in a car crash coming back from the ocean so we can only assume he was with them and that's the memory he has. He breaks the windows anyway. 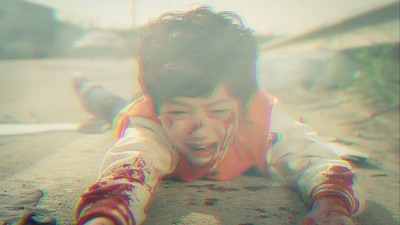 Manager Oh wakes up at the hospital to be informed it was just indigestion, but Hye Mi is sitting next to her and stayed there all night.  The other girls come in too, all concerned for Manager Oh. They've become this cute girl power team. Hye Mi may have redeemed herself just a tiny bit.  Manager Oh's husband comes rushing in. Hye Mi called him and he was all the way in the Philippines (shout out to all my friends there now), but he came back when he heard Manager Oh might be in danger.  He and Manager Oh communicate in sign language and are quite lovey dovey. We assume he must be deaf, until he talks to the other girls in English. He can't speak Korean and Manager Oh can't speak English, so they communicate with sign language. If that's not the cutest thing I've seen today... That gives Hye Mi an idea for the museum at the theme park.  They'll make it accessible to people who use all different forms of communication and have disabilities.  Something that everyone can use. 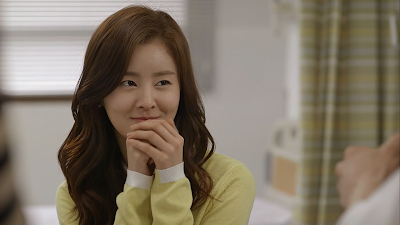 The chairman and Hee Cheul are also at the hospital. The chairman is getting a check-up and Hee Cheul found out about it, so he came to take care of him as his "son". I understand now that he calls himself son, but is not biological the chairman's son. That one took me awhile to figure out. Anyway, the doctor says the Chairman is fine, but once Hee Cheul leaves you find out he's lying. We don't know what the Chairman has, but it's obvious he's pretty sick. Hee Cheul can sense he's being lied to and that's when the man that the Senator sent to help Hee Cheul out arrives. Hee Cheul tells him to look into the Chairman's medical history.  He'll find out what's wrong with the Senator soon enough. 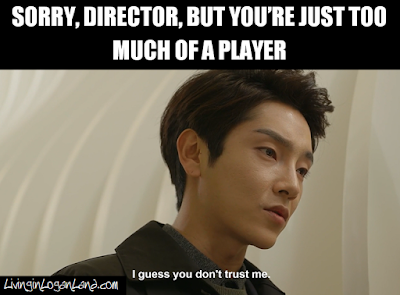 Tae Woon drops Ji Na off at work and asks her to come by the flower shop later that night since it's his birthday, but as he says this there's a lot of noise. Ji Na only sort of hears him and half-heartedly agrees.  Not a good sign.  Right after Tae Woon drops her off she calls Hee Cheul to try to explain why she didn't answer his calls last night (her phone was locked in the van, remember). He is happy to see her calling and tells her to stay there. 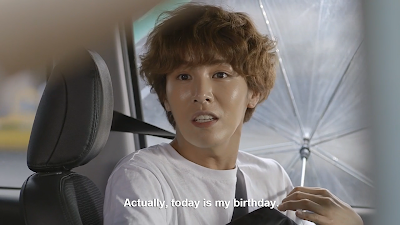 Oddball and Mr. Eccentric are still working at Dr. Car's when Tae Woon shows up. They've worked all night. For a bunch of weirdos, looks like they can work pretty hard when they need to.  So, along with Tae Woon they all go to some sort of public bath where we see  A LOT of them. More than almost any Kdrama I've seen.  I almost had to look away. Mr. Eccentric almost gives away that he's spying, but quickly covers his tracks. 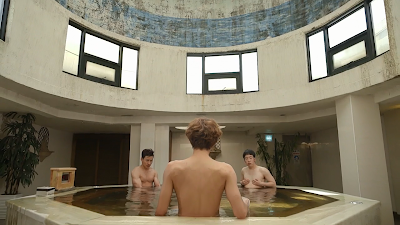 Hee Cheul has taken Ji Na to the gun range, where they have the cliche "let me get real close to you and show you how to shoot" scene. Then they go to have lunch at a temple.  Hee Cheul states it's because he doesn't like ordinary dates. Then he just goes ahead and lays it out there. He tells Ji Na he wants her to himself and to stop going to the Flower shop, that if she comes with flowers in the morning he'll take it as a rejection. Um...is he forgetting he kissed Hye Mi? Anyway, he says he'll take her home so she lies and has him drop her off at one of big houses in the wealthy district. He kisses her forehead as she leaves and she almost seems more grossed out than anything. She really doesn't seem to be digging him at all anymore. 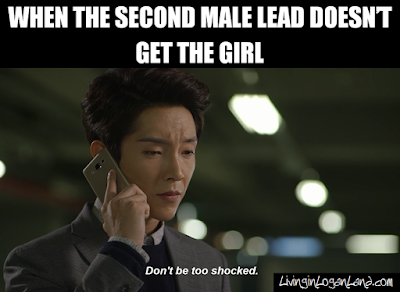 After Hee Cheul leaves she goes to her real house and gets ready for bed. At this point we know it's late. We don't know how late it is, but she states it a couple times. Oddball calls and tells her he needs some of the pictures he took at the amusement park so he can get started on work. She offers to go get them from Dr. Car.  She rushes over to Dr. Car's in her pajamas with no make-up and they chat for awhile.  Dr. Car tells her that Tae Woon's parents died on his eighth birthday and it took him a long time to recover. 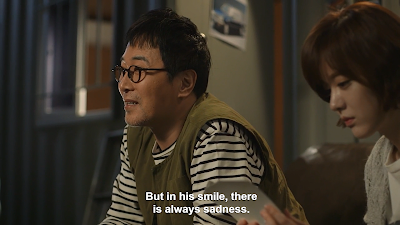 On Ji Na's way home she suddenly realizes that's what Tae Woon was saying- he was asking her to come over because it was his birthday. So she literally runs over to his house. She finds him in the greenhouse, sitting there staring at the ground and crying. She apologizes and grabs his hands. He's in a lot of pain and she can see it. Now I don't know if it's because she felt guilty or if he truly moved her heart, but what she does next is unexpected. She kisses him. That's right. She's the one to initiate the kiss. He backs away a little at first, but she's unphased and moves in and together they share a sweet yet sorrowful kiss. Even though it's not out loud, Tae Woon expresses for the first time in his head that he loves her. And of course that's where they end it? I mean you can't have a Kdrama first kiss without a cliff hanger, can you?

So I know that's a lot to take in? What do I think about it?

-Why is there so much fresh trash and nice, clean stuff at an abandoned amusement park?

-Tae Woon would be an amazing father. I hope they show him having kids in the epilogue.

-If there's one thing I've learned from Kdramas, it's that stomachs are natural lie detectors. "Are you hungry?" "No" "*Grumble*" "Well, let me get you food." Happens all the time.

-OMG! Shadow puppets! Oh, and the shadows are kissing. Are they "foreshadowing"? Lol.

-Hee Cheul is the least excitable person ever. I feel bad for Mr. Eccentric when he gets no reaction out of him by telling him Dr. Seed is Mr. Unfortunate.

-When Manager Oh calls out Hye Mi for being a fake vegetarian, I literally cheered.

-The story about that dog in space...why would you send a dog into space alone? Isn't that a bit cruel? Isn't its death inevitable?

-It was so cute when all the girls banded together to take Manager Oh to the hospital. I might have made a verbal squeal.

-My first thought when it was cold was that Ji Na and Tae Wooon needed to cuddle for warmth. How could it be his last? How frickin honorable is he?

-Manager Oh and her husband are unexpectedly the most adorable couple.

-Why do I feel like Hee Cheul wants to push the Chairman down the well instead of down the hallway in a wheelchair?

-For Hee Cheul not liking ordinary dates, he sure did pick something super cliche.

-I couldn't enjoy one bit of Ji Na's conversation with Dr. Car, because I knew she was forgetting about Tae Woon and it stressed me out too much.

-That kiss is really bothering me! Was it a pity kiss or a feelings kiss?!? I need to know now!!!!

Well, I guess we might all have some unresolved emotions...at least until tomorrow.  Stay tuned for the Episode 10 recap tomorrow night. In the meantime, recap the previous episodes with me. You can find the links to all prior episodes below. Also stay tuned Friday 5/15 when I'll be kicking off a series of Producer recaps.  I'm excited for it, you should be too :)