So now that the drama is over, I wanted to take an honest look back at My Unfortunate Boyfriend and do an overall drama review in a similar vein to other dramas I've reviewed. So here we go. 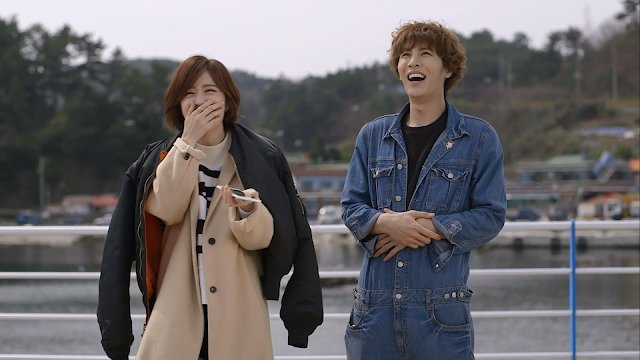 First a quick summary: The bright and ambitious Ji Na gets a job working at a prestigious company after moving to Seoul, but at the same time crosses paths with the aptly named Mr. Unfortunate who is said to curse everyone he interacts with. And sure enough hilarious hijinks ensue as the two continue to cross paths over and over. Ji Na has her eye on her charming but manipulative boss, Hee Cheul, and he's got his eye on her as well. This doesn't make his long-time friend, Hye Mi, happy. She's been in love with Hee Cheul for a long time and she's not about to let just anyone get in her way. Hye Mi and Ji Na are competing for more than just a man as they become rivals at work as well as they both fight to prove their worth. Another workplace rivalry erupts between Hee Cheul and Mr. Unfortunate as the position for CEO is up for grabs.  As Ji Na and Mr. Unfortunate continue to interact their initial feelings of annoyance toward one another turn into something much more and Ji Na is forced to make a choice between following her head and going toward the life she always wanted or following her heart into uncharted territory with a truly bizarre man.

Overall, I'd say this is a good solid drama. In this drama, it was the wonderful cast of characters that really brought the drama to life. It doesn't have a super dramatic or crazy plot, but there are some fun plot twists. I found myself intrigued and looking forward to each new episode. I experienced the full spectrum of emotions from giddiness to anger to sadness-every emotion that a good drama should evoke.  It had its flaws, but they were more than compensated for some fresh plot elements. Blah Blah Blah really was the breakout star and took this drama from being a mediocre drama to a good one.

-The character of Ji Na. Seriously one of my favorite female protagonists of all time. When the drama starts, you think she is going to be this ambitious ladder-climber that steps over anyone she needs to on the way to the top, but you quickly see that she's not like that at all. She's full of life and hilarious but most importantly has a heart of gold. In fact, she is kind and accepting to everyone that comes her way whether they're incredibly weird, childish, or even if they're her rival. As much as she likes to believe she's heartless and ambitious, she always chooses to do the right thing over the most advantageous.  They set the drama up with No Min Woo as the star but  Yang Jin Sung quickly and easily became the show stealer and seemed to get much more screen time.

-The secondary characters.  They were so great. So quirky. So much fun. From "Oddball" the genius who cyber-bullied a celebrity to Ji Na's and Mr. Unfortunate's best friends who flirted with food all over their faces, I would watch a spin-off series for any one of the minor characters.  And they weren't just cliche characters either, they were all loveable and quirky in their own unique ways.

-Straying from Kdrama cliches.  Okay, so every drama is going to follow some Kdrama cliches- I mean that's what makes it a Kdrama: piggy-back rides, second male lead syndrome, sick uncles- BUT this drama broke free of a lot of the overused plot devices that can weigh kdramas down. To begin with, when the leads finally got together, they did not once break up.  Even though Ji Na finds herself in love with the goofy Mr. Unfortunate, she never denies her feelings towards him. She's even the one to kiss him first.  Even when his uncle asks her to end things with him she does not.  Another nice reversal of the kdrama cliche is that when Mr. Unfortunate realizes that his parents were on the way back from visiting Ji Na's parents when they died, he doesn't blame Ji Na's parents at all.  I mean, to me that's logical. But so many times in Kdramas, people get blamed for things that weren't even remotely their fault.

-I hate to say it, because I know a lot of people loved him, but I did NOT love the character of Mr. Unfortunate.  He was too childish for my tastes. I will admit he had a few very manly moments that had me swooning, but that also made me realize that he was not slow but acted like a kid by choice. Which kind of grossed me out. His naivety did lessen throughout the series but fell just short of a leading man for me. With just a little more maturity a little sooner and a little less whining, he would have been quite lovely. Although I won't lie, I did enjoy some of his antics. At one points he's dressed up a clown and chasing a van down on a bicycle and I was in tears I was laughing so hard.

-I'm going to put this in the "things I didn't love" category, although I know that it actually added a lot to the drama and that is how manipulative Hee Cheul, the second male lead, was. I really, really wanted to root for him. Right from the get go I was sure I was going to have a strong case of SLS (second lead syndrome), but he was too big of a player for it to stick.  He got to the top through manipulation and not even being the object of his affection could keep a person safe from his sleazy ways.  Basically, I was disappointed that he was too much of a slimeball for me to be in love with. Lol. So again, it actually probably made the drama better, but still...

-The plot development was a little lacking. From the synopsis and the feeling the drama gave off at the beginning, I thought it was going to be one of those dramas with a crazy fun plot. However, not a lot happened over the course of the drama.  Not to say it was boring, it wasn't.  I just was expecting some sort of big event or journey or what have you and really the drama just consisted of a whole bunch of little situations and mishaps.

Resolution: 85%
-They did tie things up at the end of the drama, but they also left things open-ended. Along with all of the resolutions, there were new beginnings.  Three of our beloved couples get engaged, someone is expecting a baby, someone gets a new job, and someone opens a new business. So while we get closure in some areas, there are even more questions that we need answered.  Still, it ends on a happy note with a bright future ahead, so I won't complain too much.


I'd recommend this drama to anyone who enjoys a good romantic comedy, especially if you enjoy dramas that step away from some of the old Kdrama cliches.  What did you guys think? What were the things you loved/didn't love about this drama?