Jeju Island aka Warm and Cozy is over and has me feeling warm and cozy all over. It was such a sweet drama and I'm finally ready to fill you in on my overall thoughts. 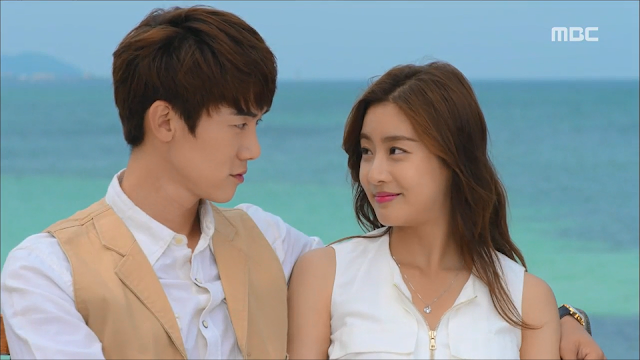 First a quick summary: Jung Joo first meets the friendly and wealthy Gun Woo as teenagers when she believes him to be her brother, which he isn't but she never forgets him nor him her.  Years later, dumped and broke Jung Joo gets swindled by her own cousin and instead of purchasing her a house to live in, he's bought a delapitated house on Jeju Island to turn into a cafe. To Jung Joo's surprise, Geon Woo owns a restaurant right next to her place, where he is the chef, but it desperately trying to sell it so he can chase after his first love. Due to a misunderstanding, Geon Woo believes Jung Joo has a terminal illness and therefore gives her his restaurant in exchange for only a small deposit.  When Geon Woo's older brother cuts him off, Geon Woo has to stay at the restaurant as chef and live there together with Jung Joo. All of the townspeople get to know Jung Joo and like her as she becomes involved in the community, even learning to become a lady diver which is a profession the village prides itself in. The town mayor especially has taken notice of Jung Joo and developed feelings for her.  Geon Woo is still trying to win the heart of his first love, when Jung Joo's heart begins to turn toward him.  The two grow close and when Geon Woo realizes she is healthy is more relieved than anything and his heart begins to turn towards her as well. But because of Geon Woo's playful attitude and the number of times he's teased her in the past, it takes some time before Jung Joo believes that her love is no longer unrequited. Once these two are finally on the same level, everything is warm and cozy.

The Hong sisters have added another lovely drama to their repertoire. I said when I first started watching it that it made me want to quit my job and move out to the islands. That was a feeling that didn't fade. It really sold the relaxing island vibe of Jeju Island. Although, I did like this drama I have to admit that it is not as unique in its plot as I was anticipating considering the Hong Sister's reputation for unique plots.  It's pretty run of the mill as far as the plot is concerned poor girl vs rich guy equals love. The one wrench that is thrown in is that Geon Woo believes Jung Joo is sick for most of the drama, but it really doesn't have a big influence on the plot other than it causes him to be nicer to her than he normally would be. So don't expect any Sixth Sense like plot reveals, but that doesn't mean it's boring. Far from it. The characters are charming and funny and there are some great sub-plots going with the side characters. There is no lack of hijinks. So rather than an overall super unique plot with twists, this drama is defined by a magical setting, loveable characters, and great writing. The OST really adds to the drama as well. The music in combination with the ocean views and the overall laid back feel of their restaurant really gives the drama a unique feel.

-Geon Woo. Of course I loved Yoo Yeon Seok as the wonderful Chilbongie in Answer Me, 1994 but I loved his portrayal of Geon Woo even more. I can't imagine anyone portraying the character better. Geon Woo is so adorable and such a change from the normal cold and prickly chaebol. He was warm, friendly, and a little flirty but not a womanizer.  He was selfish but starts caring for Jung Joo which provided a great contrast. So he would do things like make plans to have dinner with Jung Joo, but then go leave to meet his first love when she called, but then feel guilty towards Jung Joo afterward and make it up to her. So essentially he started off as a spoiled and selfish brat who didn't think about the needs or feelings of others and through Jung Joo learned to become considerate of not only her, but his family and the community as well.

-The feel of the drama. As I said earlier, I really dug the island vibe.  The music and the breath-taking scenery really gave the whole drama a calm and easy-going vibe. And even when conflict arose, there was still this sense that everything was going to be alright because even if Jung Joo and Geon Woo never properly communicated their feelings to each other, they were still on a beautiful island and accepted into a community of people who truly cared for and watched out for one another.

-Geon Woo's family. Even though Geon Woo and his siblings all had different dads, they still remained pretty close. Geon Woo's brother is strict with him and has cut him off only for his own good.  He knows that Geon Woo has some growing up to do and is happy when realizes what a good influence Jung Joo is on him. I love that he decides to become a lady diver just to pursue a woman. Geon Woo's sister, while a little shallow, clearly loves both of her brothers a lot and in my opinion that excuses some of her over-protective behavior. Though these three came from money, they see a person's value based on their character, not on their wealth (although it takes dear sister some time to come to that conclusion).

-How long it takes Jung Joo and Geon Woo to get together. While there is clear interest between the two of them throughout the drama and confessions have already taken place, Geon Woo and Jung Joo don't actually become a couple until the end of the second to last episode. So all their mutual romantic interactions and realization of future plans are limited to only one episode and of course there's still the plot to wrap up.  While we do see a promising future ahead for these two, it's hard to believe that things are going to work out smoothly because they aren't the best communicators and it took them 15 episodes to even realize that they both wanted to be with each other.

-The number of times Jung Joo tries and fails to love the mayor. I know she's not being manipulative intentionally. When she tells the mayor that she's going to give a relationship between the two of them a chance, she sincerely means it. Jung Joo should have taken the time to get over Geon Woo before promising the mayor she'd try to love him. Especially when she kept trying and failing. At least after the first time she should have told the mayor she needed some time. The problem here is that her heart is firmly planted in Geon Woo territory.  But in all fairness to Jung Joo, the mayor knows this, but still keeps pushing her.  So really, he's kind of asking for it. He should have let Jung Joo come to him on her own.

-Mok Ji Won. What a horrible second female lead. She's fantastic as far as characters go because she is such an awful person.  So in that regard, this isn't really a detractor because everyone knows a good villain is the mark of a good drama.  Still, Ji Won was so awful and had zero redeeming qualities that it was hard to understand why Geon Woo chased her so and made it that more frustrating every time that she did. She was cold and calculating and the biggest gold digger I've ever seen in a Kdrama. To make matters worse she intentionally lead Geon Woo on for years and wouldn't let him leave her side. She had me screaming at the TV on more than one occasion.  In all seriousness, I didn't like how she got a happy ending- marrying a kind man with money who adored her that she didn't seem to care about at all.  Isn't what goes around supposed to come around?  Hopefully karma would eventually catch up to her in this fictitious world.

-The drama does end with Geon Woo having a house built for him, Jung Joo and their future children and while they do discuss marriage, there is no proposal. In reality they've only been official for a very short period of time.  I'm sure I've told you how I love a good clean ending and if we could have seen a 'two years later' piece to wrap up the drama, my heart would have been much more at ease.  The future of the other characters are pretty bright with a happy marriage for Geon Woo's brother, and a new romance blooming between Geon Woo's sister and the mayor.  So those romantic pairings helped ease the longing for more of Geon Woo and Jung Joo's future.

Overall, Jeju Island Gatsby warmed my heart and I looked forward to the new episodes every week with much anticipation and would devour them as soon as they were available. I'd recommend this drama to anyone who is looking for a relaxing light-hearted drama to watch or for anyone in need of a little island getaway from the comfort of their own home.