Orange Marmalade is over! Here I was ignorant to the fact that it's only 12 episodes long, thinking I had another month of high school vampire band bliss. I expect some major withdrawal from this series as I found it absolutely delightful. 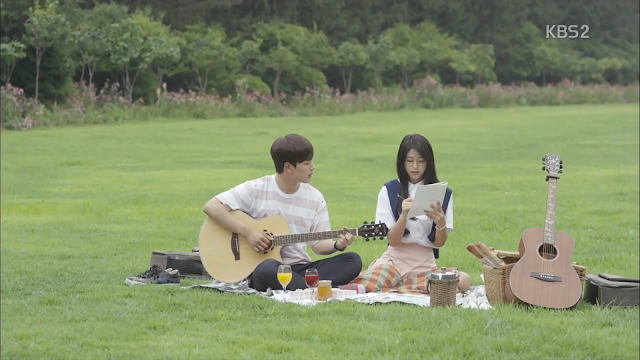 Brief Summary: Ma Ri is a teenage vampire living in a fictional Seoul where vampires are known to exist, but live in hiding amongst humans. If their identity is discovered, they have to relocate. Ma Ri only wants to blend in which becomes hard when class president Jae Min takes notice of the new student and is oddly compelled by her. He's hated vampires since his mom married one when he was a child. Ma Ri's childhood friend, Shi Hoo, is also a vampire and transfers to her school. In contrast to Ma Ri, he doesn't like the fact that he's supposed to live an obedient vampire life and is a bit rebellious. All three students are also incredible musicians. Despite her resistance, Ma Ri and Jae Min fall in love and along with Shi Hoo and other students at the school start a band, Orange Marmalade. Along the way we see complications as Ma Ri's vampire identity is revealed and we also see the past lives of our three main characters as almost half of the drama takes place during the Joseon era. It's a story of love, friendship, sacrifice, and acceptance that transcends time.

﻿
From start to finish I loved this drama. Within the first episode I was addicted; craving more like a vampire craves blood. Sadly, only one episode a week was released so this was a torturous drama to simulcast (watch weekly as it airs). It gave me that sweet feeling of anticipation and excitement that got me addicted to Kdramas in the first place. Often I get frustrated with high school Kdramas at the shallowness in relationship and story development along with the snail-like romance development. That was a non-issue in Orange Marmalade. We had several great kisses between the leads and a few "Whoa, did that just happen in a high school Kdrama?" moments. While the general purity of Kdramas is one of the things I love about them, I do love Kdramas that stray from the norms and shake things up a bit and this drama did. The major detractor was the fact that there are only 12 episodes! There was so much more I wanted from this drama! The fact that I loved this drama just left me frustrated because I didn't get enough of it. Seriously, whose idea was it to have such a great drama and cut it to 12 episodes? Point them out to me. I have some words for them. More on this and how it took away from the drama later. The music element was a fun factor, but a lot smaller than I expected. On other music-themed high school dramas we get a lot of fun band moments, but they were quite limited in this drama. And no surprise, but I would have liked to see more. Still, it was fun to see the band become like a family in the end. Overall probably one of the better Kdramas I've seen and would have gotten flying colors if they had extended this- I think a 30+ episode arc would have been appropriate. Anyway, onto the specifics of the good and the bad of this drama.


Things I Loved:
-Seolhyun. I'm not going to say Ma Ri, because I didn't feel particularly attached her character. Although I did like her, she was a little too weak for my tastes. Not that a character has to be confident all the time, I understand her insecurities and need to fit in, but I would have liked to see a little more conviction in her moments of conviction and a little more camaraderie with Shi Hoo (her only friend for most of the drama). Seolhyun, however, proved herself a great actress with the material she had. The way her face lit up in moments of happiness was pure magic and how she conveyed sorrow was so incredibly believable. Way to go, Seolhyun, you are a delight!

-The parallel Joseon Plotline (Surprisingly!). I'll be honest; I've been avoiding historical Kdramas for a long time. If you didn't notice, the extensive list of Kdramas I've seen did not include one historical one before starting Orange Marmalade. I was sure I'd hate them, but imagine my surprise to find that I did not hate the historical plotline. I actually really enjoyed it, more than the modern day Orange Marmalade plot if I'm telling the truth. It was full of great emotion and a great plot with these characters I loved without the high school drama. I was kind of bummed when we went back to present day. I so loved the Joseon plot that I finally felt emboldened to watch Sungkyunkwan Scandal and loved it - a treasure that I may never have discovered if it weren't for Orange Marmalade.

-Mr. Han. Oh how I loved this man. Ever since first seeing him in Answer Me, 1997, I’ve been fascinated by Song Jong Ho. For starters, he's got a great face and is equally magnetic playing a villain or a hero. I hope for many more rich roles for him, like the one in this drama. Mr. Han as a character was effortlessly kind and understanding of both his vampire protégés and the testy Jae Min. Let’s not forget he made an excellent vampire ninja assassin as well. I'd let him bite me, that's for sure.

-Shi Hoo's reunion with his parents. Shi Hoo's tearful reunion with his parents at the end of the series had me tearing up as well. Here we've been thinking they're dead for most of the show and now this rugged badboy is hugging his mom while crying. *Emotions* I love the fact that he and Ma Ri are essentially the ones that got them out of prison. The vampire immersion program wouldn't have been so successful if it weren't for Orange Marmalade setting the example for human/vampire peace. Because they taught the world that vampires could get along with humans, his parents were forgiven for the crime of revealing their vampire identity.

-The Second Lead Loveline. Even though it was only hinted at in the end, and we saw brief interactions between Shi Hoo and Ara, our two second leads in this drama, it was unexpectedly perfect. I hated Ara for the majority of the series. Only in the last third of it did I find it tolerable. And for most of the drama I felt that Shi Hoo was a much better man for Ma Ri than Jae Min. But after the destiny between Ma Ri and Jae Min was clear and Shi Hoo was determined to let it happen, was I open to the Ara/Shi Hoo loveline. His bold flirtations along with her shocked and coy responses are unexpected and yet so true to their character. The fact that he's the one that gets to and changes her perspective on vampires speaks to their compatibility. And he's far too smoldering of a second male lead to end the series unattached.


Things I Didn't Love:
-The Inconsistent Speed. The timing was a bit off. Some parts went at a normal speed; there were even a few parts draw out that definitely didn't need to be, but then they completely glazed over big chunks of the plot. For instance we see the characters debating starting a band for several episodes, but once they agree the process of starting and rehearsing and even their first gig takes place in one musical montage. A few months’ worth of really good bonding and character development over in a few minutes. In this case, the band storyline played a very small part of the drama overall which surprised me because I thought that was going to be the focus of the plot, with the vampire part being the smaller factor. What could have remedied this problem has to do with the next issue I have with this series...

-The Number of Episodes. This drama is one that would have been considered too short if it was the normal 16-episode length, but 12 episodes!?! In my experience, any drama that has one or more episodes that take place in the past needs to have an extended length otherwise there isn't enough time to explore the story thoroughly. This is no exception, especially considering that there was a completely different plotline during the Joseon-era episodes. We only were allowed to shallowly skim the surface of these great stories. Never can I think of a better example of where the length of the drama is its major fault.


Resolution: 95%
Keeping in mind that there typically isn't a whole lot of resolution in a high school drama, since they've still got so much of their lives ahead of them, I was pleasantly surprised at how much resolution we have. We get a glimpse into the future of Orange Marmalade and their viral success; we see growing acceptance of the vampire race, we see Ma Ri and Jae Min's continued relationship; we see Shi Hoo reuniting with his parents, and we see a possible romantic future between Shi Hoo and Aara. This is probably the most satisfying resolution I've seen among high school Kdramas. Thank you writers!

Despite my complaints about the length, I loved this drama! I'd recommend it to anyone looking for a fun supernatural twist and a sweet love story. For those worried about the historical plot or who don't typically let vampires I'd say don't let it stop you. It's a really good drama!