Welcome back friends and future friends! Are you ready for another nail-biting, sigh-inducing episode from The Time That I Loved You, 7000 Days? Things keep getting more and more interesting and a complicated web of relationships is starting to form.

When we left off last week Won was outside Ha Na's house wondering if it was okay to start loving her.  I kindly told him on her behalf that it was, of course, okay.  We start this episode when Ha Na's mom comes out of the house with snacks she prepared for Ha Na and asks Won to take them to her at work. When he gets there, he finds she isn't there any longer and no one seems to know where she is. He calls around to all her friends and co-workers and eventually finds out that she lost the project she had been working on for a year and is probably feeling pretty down. Ha Na's family is worried and eventually her mom gets a call from Ha Na who tells her she's staying the night at a friend's.  Ha Na's brother, Dae Bok shows Won a packet he found in Ha Na's room showing the project she's collaborating on with Seo Hoo. 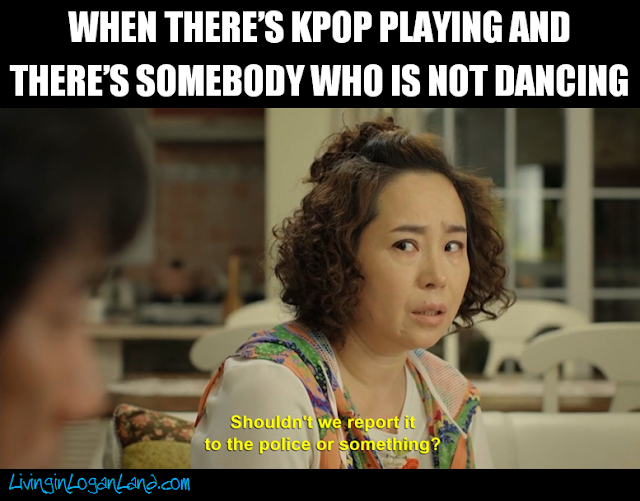 Ha Na is not actually staying at a friend's house but books herself a nice suite in a nice hotel.  Ha Na has called her mom to come and the two drink together. Ha Na tells her mom about losing her project and getting singled out at work for 'men problems' and they cry together. Ha Na's mom points out how perfect Won is for her. Ha Na admits she does see him as a man, but that her mom shouldn't hold out hope. 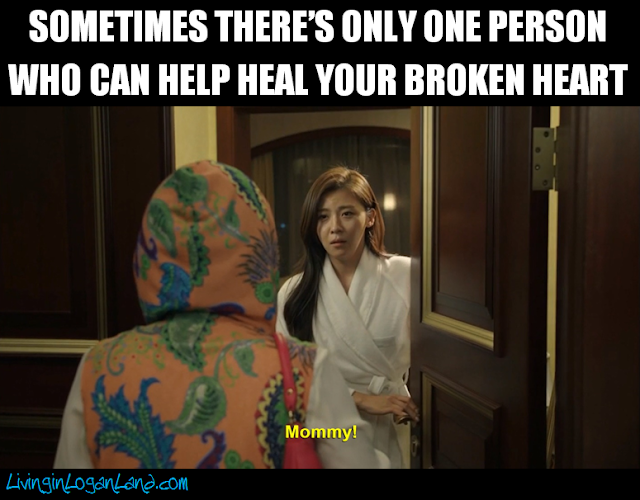 We see a flashback to 2002. Won is at a carnival with a girl who is trying to gain his attention. Ha Na and some other friends show up and they all drink together.  The girl gets jealous of Ha Na and makes her a pancake made out of grass, feeds it to her, and then sprays alcohol all over her, telling her she leads men on.  Won defends Ha Na and the girl leaves. 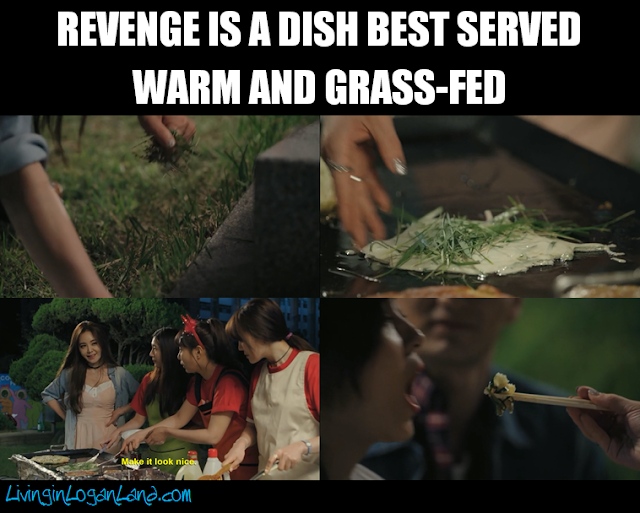 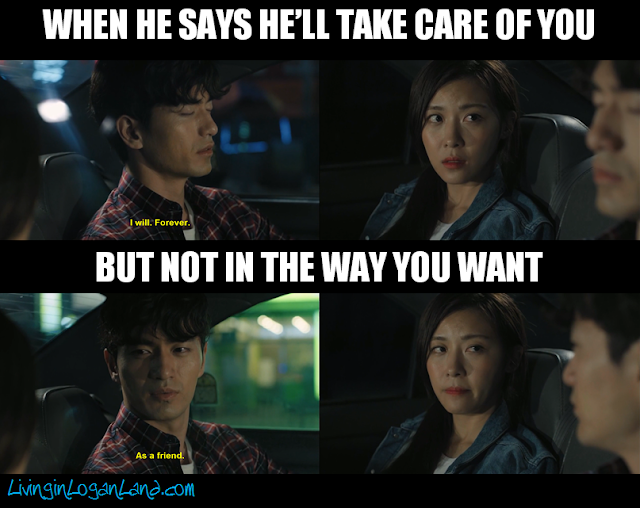 Back to present day. Upon hearing the story, Ha Na's mom agrees not to try to force their relationship anymore.  In the morning Won, who is still worried about Ha Na, calls Mi Hyang and has her reschedule his flights so he can go look for Ha Na.  When he goes to look for her at work he finds she didn't show up. As Won goes to leave, Seo Hoo shows up and Won is relieved to see that Ha Na has not been with him. Right after he leaves, Won gets a call from Ha Na. 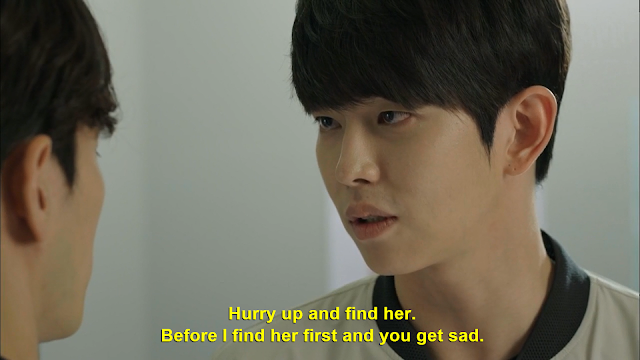 Seo Hoo meets with Ha Na's manager and asks that once she arrives she be sent straight to him. Then we see a Seo Hoo flashback.  He's in a suit and is covered in sweat, sprinting towards Ha Na's house. When he shows up he sees her and Won arrive and then sees Won comforts her and he realizes they're in love but aren't aware of it. 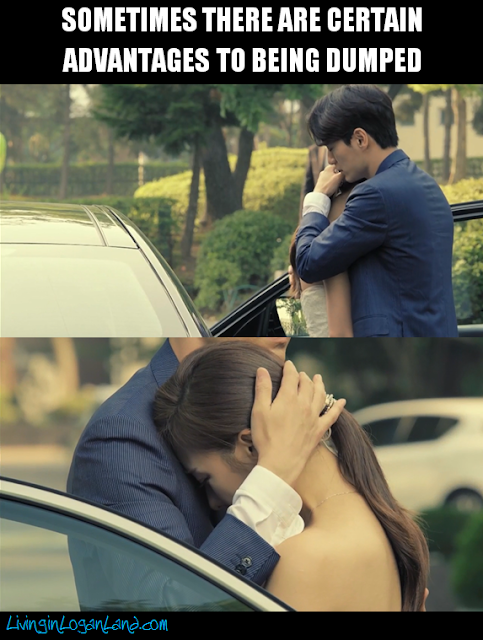 Back to present day Ha Na comes home and Won is sitting on his step. She greets him excitedly, but he is mad.  She tells him she didn't call on purpose. That she wanted to, but that she needs to become more independent because she's been relying so much on him to help solve her problems and she's staying away from men for the time being.  Internally, he's a little frustrated at the timing since he's decided to start loving her, but decides to respect her decision until she's ready to start involving herself with men again. 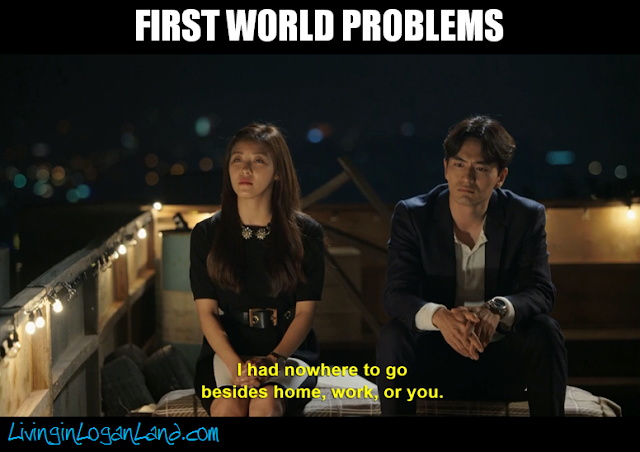 When Ha Na goes into work the next morning she apologizes to her manager and then gets sent straight to Seo Hoo. He takes her to the place that he's staying, a hotel room, to conduct their business.  Ever the professional, she tries to show him the marketing posters that have been designed but Seo Hoo, just happy to have her there, keeps smiling and asking silly questions. 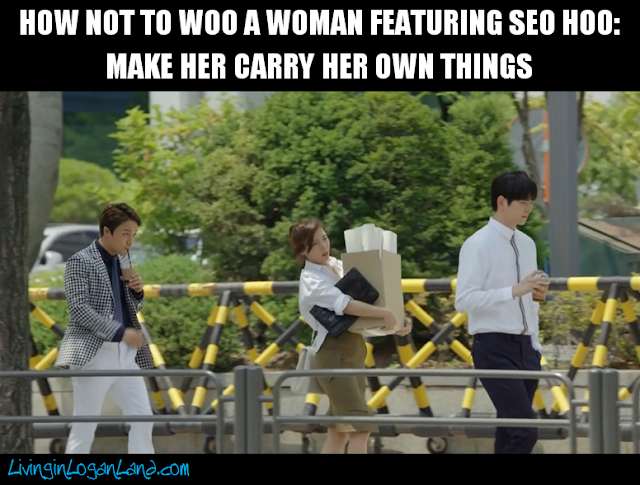 Dae Bok shows up at Ha Na's office and runs into Ha Na's co-worker, the one that he met at the shoe store. She flirts with him and asks if he has a girlfriend.  Back at Seo Hoo's hotel room, Ha Na is getting frustrated with Seo Hoo, but luckily his teacher shows up and she gets to leave. She calls Won as she's leaving who is still mad and says she has to make it up to him.

Flashback to college when Ha Na tries to set Won up with a friend and takes her to the rooftop to meet him. Won wants nothing to do with the set up and is mad that Ha Na took someone else to their hideout, their special place.

Back to present day Won visits Mi Hyang at work and So Eun is there with her.  So Eun asks to speak with Won. Before she can say anything he basically insinuates that if she tries to go any further she's only going to hurt herself; ending it as efficiently at Won knows how (which isn't very efficient if we're being honest). So Eun starts to cry and Mi Hyang finds her and awkwardly comforts her. 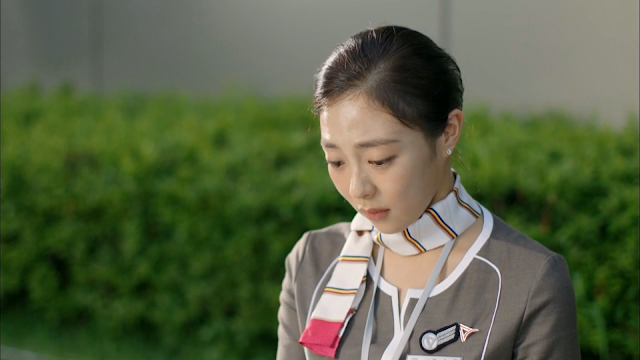 Won and Ha Na go out for drinks with their high school friends and then to the rooftop afterward.  In the interest of honesty, Ha Na tells Won that the new project she's been assigned to at work features Seo Hoo and that she has to work with him. He's glad she's loyal in telling him. Won tells her that he's going on a short trip to the U.S. for three days and asks if she wants to go on a date when he gets back. She says sure. (I'll interject and say it wasn't really in a romantic way, more of a friend date). While he's gone he has treats set up for Ha Na every night. 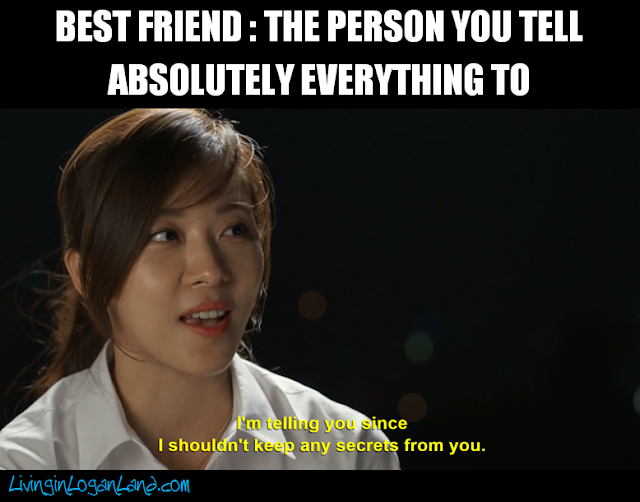 Ha Na leaves for work in the morning and Seo Hoo is there waiting for her outside her house. He takes her to the concert hall where he begins to play a piece. We see a flashback of Ha Na asking him to play a song in his next performance. He tells her it's not her performance style, but suggests a private performance for her instead. Back to present day, when Seo Heo finishes the song he looks up to see Ha Na is no longer there. She has gone back to work and complains to her manager that she's being treated like a secretary. Seo Hoo goes home and is looking through his old music books which all still have sticky notes from Ha Na posted on them from when they were together. 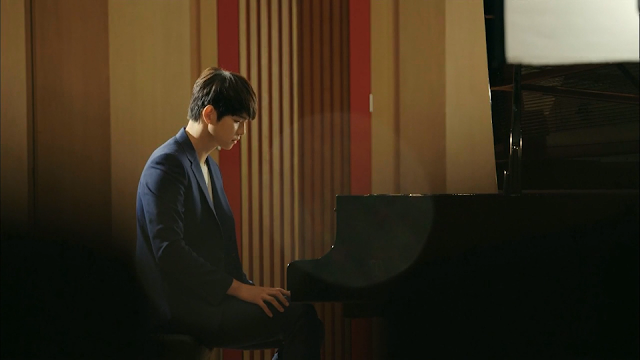 After work Ha Na comes home and Won is back. The two are excited to see each and they embrace enthusiastically.  They go to the arcade, but then Ha Na gets called away for work. After she leaves Won pulls out a jewelry box and tells himself he'll have to wait a little longer. 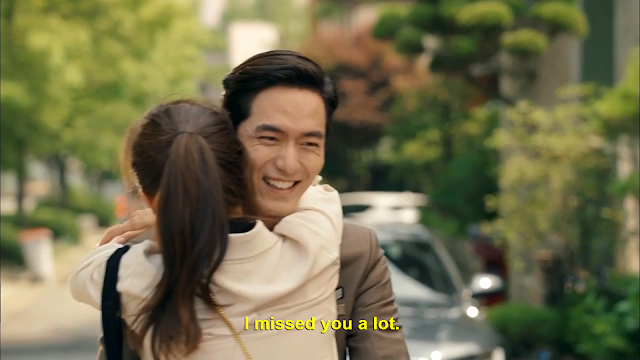 Ha Na gets called to a club where her team, Seo Hoo, and his manager are all drinking.  Meanwhile Won is at Ha Na's house playing video games with Dae Bok when Ha Na's mom finds Ha Na's discarded bunny in Dae Bok's room who says it's that bunny's fate to live in their house. 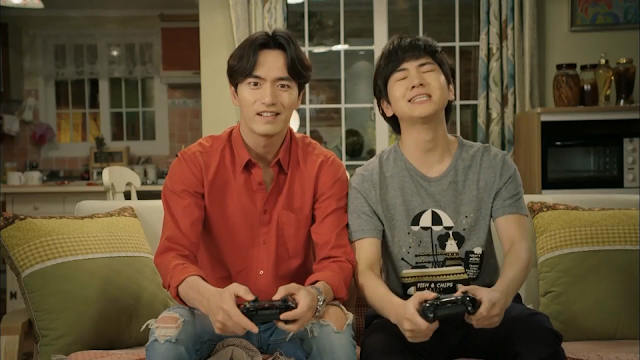 Ha Na comes out of the club drunk and Seo Hoo follows her out and offers to give her a ride home. She declines and tells him she doesn't like him. Won shows up and has Ha Na get on his back and gives her a piggy back home. 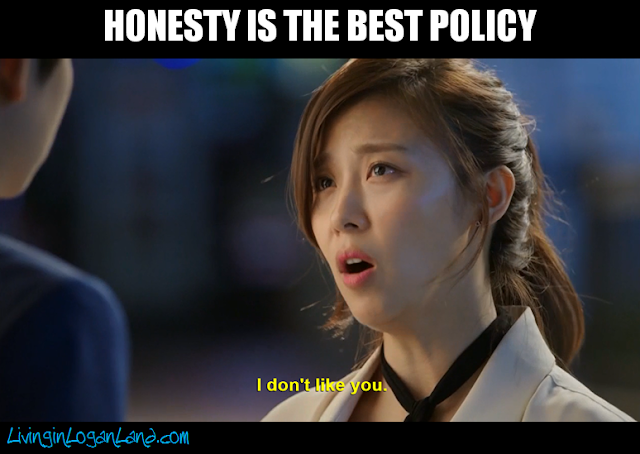 Our episode ends as we see a flashback to Won and Ha Na in college.  Ha Na prepares a special event with watermelon outside at night in an effort to apologize to make it up to Won for bringing someone else into their hideout.

Ahhh, we came so close to Won confessing this episode. I'm feeling some major frustrations, how about you? Let's discuss ;)

-First of all: Won, you're the one who's bringing up timing. I say you've got to act now before you lose your chance. Your gut is right not to trust Seo Hoo. He came very close to permanently stealing Ha Na away and now he's back. Tell her how you feel, Man!

-Back in college Ha Na gave Won the perfect opportunity to confess his feelings and he gave it up! What an idiot.

-Okay, seriously, who makes a grass pancake for someone and feeds it to them just because the boy you like is being nice to her. That is some petty crap right there. I mean, seriously!

-My heart was so warmed by the fact that Ha Na called her mom to come comfort her at the hotel. She's trying to be independent, but she knows it's always okay to rely on mom. And what a great mom she is, crying with her and telling her it's okay to quit her job.

-I do not buy for one second that So Eun likes Mi Hyang enough to hang out with her all the time. She's clearly doing it just to get to Won and I feel bad for Mi Hyang, because she's super cool. That being said, I did genuinely feel bad for So Eun when Won told her to stop.  She looked so devastated that I almost forgot that she was acting and I was watching a drama.  I actually felt bad for her.

- I'm not Seo Hoo's biggest fan, but he does seem to have always really sincerely liked Ha Na as much, if not more, than she liked him. Which is something since she's the type to get caught up in romance.  He may be arrogant, but he does seem pretty genuine.

-I felt a physical ache in my heart when Won pulled out the jewelry box.  It was a foreboding, ominous ache. Like the fact that he was pulling out now means that she's not going to get it for a very long time.  Like something seriously big is going to happen that will massively destroy their romance. No, it was not a good sort of ache at all.

-Why doesn't Won tell Ha Na's parents about Seo Hoo coming back. Surely, they'd help to keep her from him. Is it because he doesn't want them to cause more trouble for her at work?

The next episode will hopefully keep us just as much on our toes as this one.  Tune in tomorrow for my recap of Episode 8 and if you like catch up on the rest of the series so far below.  Until next time friends, Drama On!