Oh don't mind me, friends and future friends. I'm just over here BAWLING MY EYES OUT!  This episode had me on such a rollercoaster of emotion. Building me up only to bring me back down.  Wasn't it wonderful and wasn't it awful? So let's recap.

When we left off last week Ha Na was running, but we didn't know to whom. I predicted Seo Hoo and as it turns out I was right, BUT she was only running to him to essentially yell at him for being a jerk. She tells him she doesn't want to remember the memories they share. Oooo burn! Ha Na has texted Won telling him they should meet up another time, but for some reason he still waits at their hideout in the rain. 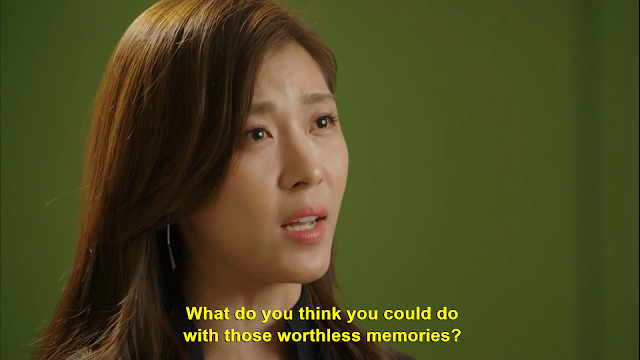 The next day at work Ha Na gives a presentation and her director questions if it's still a good idea to work with Seo Hoo but Ha Na says it will benefit them.  He asks her if she'll take responsibility if the project fails. Right, because she really wanted to do this project to begin with.  After the presentation Ha Na tries to call Won but he doesn't answer because he's in bed with a cold.  Seo Hoo's manager tells him he's risking his career, but he doesn't really seem to care. He goes to Ha Na's work to reassure her. 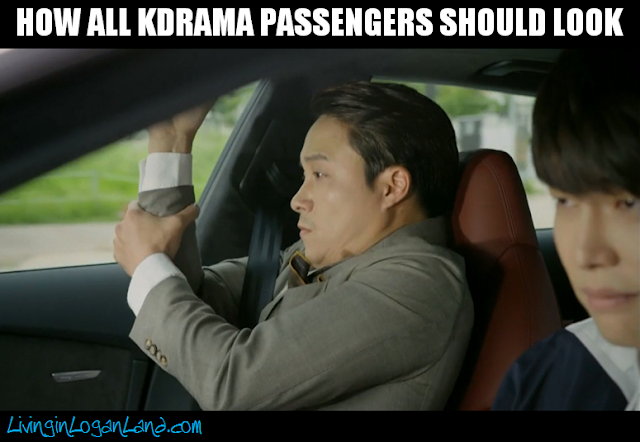 Ha Na goes home to check on Won and finds him in bed.  She makes quick work of giving him medicine and even calls her mom to get instructions for how to make porridge for him.  Well, she's a horrible cook and he tells her it's disgusting.  She goes home for a brief moment, but then right back to Won's. 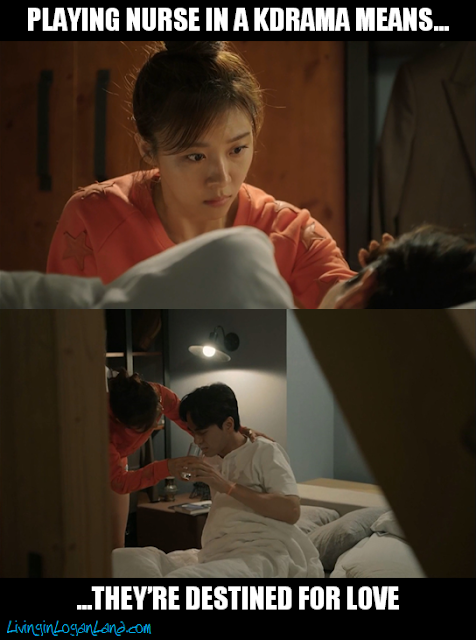 She stays with him through the night and ends up sleeping next to his bed. When he wakes up the next morning he finds the kitchen is trashed. He eats the rest of the porridge, even though it's gross, and then cleans the kitchen. And I have to tell you I've never seen a man look so happy to be cleaning a kitchen. When Ha Na wakes up she asks Won what he had to show her last night and he says it was ice cream. It wasn't. It was the necklace he bought for her. 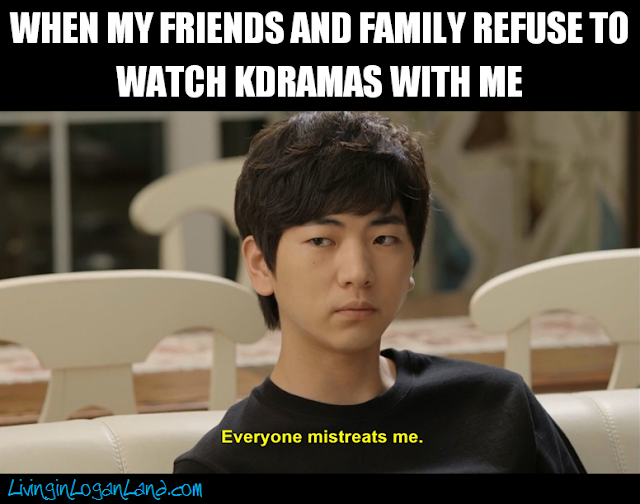 When Ha Na goes into work her manager tells her to cancel the charity soccer game they had planned with Seo Hoo that day and to hold off on the Seo Hoo project for now.  Ha Na tries to tell the reporters the Seo Hoo interview has been cancelled, but he shows up and she decides to have him do the interview anyway.  He reveals he has someone in his heart to the reporters and then goes and plays soccer with the kids. It's *kinda* cute. After the match Ha Na and Seo Hoo eat lunch on the stairs near the soccer field and he tells her the music he made while with her was his favorite. 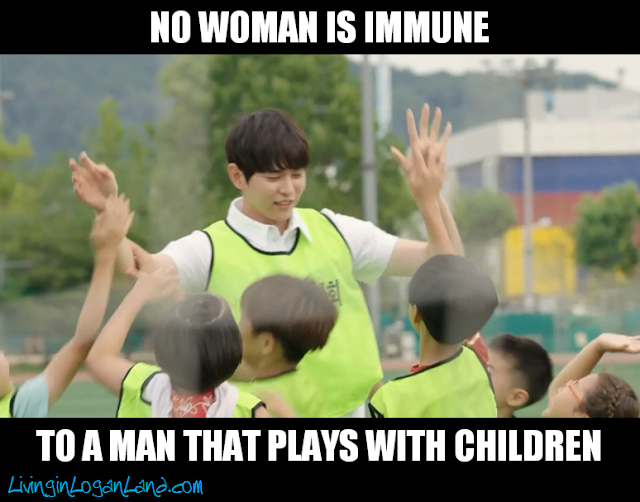 Ha Na's parents have come home and upon finding out Won was sick, Ha Na's mom made him soup and has Won and Mi Hyang over for dinner and they all sympathize with him for having to eat Ha Na's bad cooking. Seo Hoo's goes back to his hotel after the soccer game and alludes to his manager about a 'Director Min' arriving soon and tells him to let the director know that he's in the best condition. This makes it seem like he's hiding an illness, doesn't it? 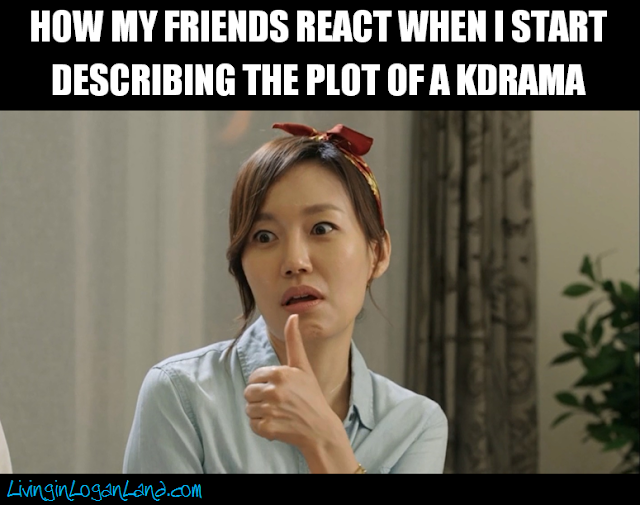 When Won and Mi Hyang go home she tells him it's not right that he hasn't let Ha Na know about his feelings yet. In the morning Won and Ha Na meet up to go running when they are rudely interrupted by Seo Hoo.  Seo Hoo and Won competitively jog next to each, leaving Ha Na in the dust. 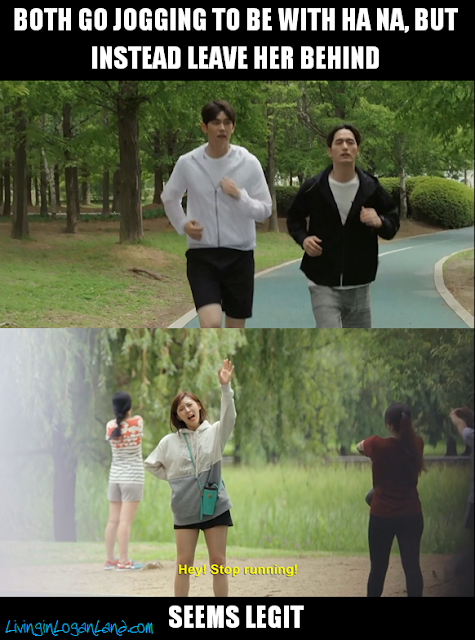 She eventually leaves and they face off.  Seo Hoo says he's going to make Ha Na his.  He says that while Won saw might have seen Seo Hoo not showing up to the engagement party, what Seo Hoo saw was his woman crying in the arms of another man and therefore it was harder for him.  Yeah, that makes sense. Won tells Seo Hoo he never deserved her (Won is right!) 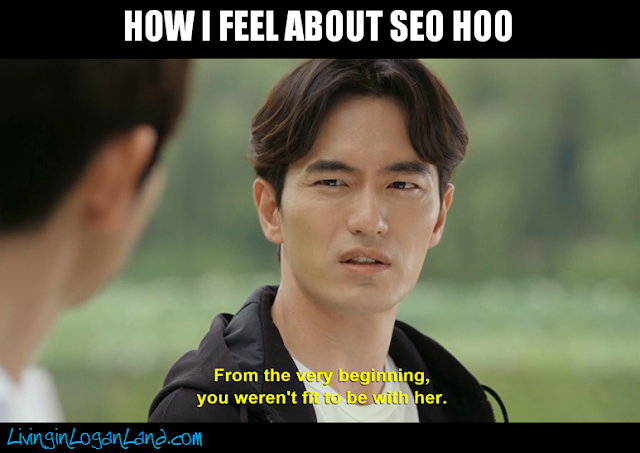 At works So Eun asks Won to a concert, which he quickly declines and tells her he'll never say hes. So instead she asks Mi Hyang. After work Mi Hyang brings Ha Na's mom make-up as a thank you for the meal and then tells Ha Na that Won isn't going overseas and wonders if Ha Na knows why. Ha Na didn't know that he had chosen not to go. Later Ha Na calls Won to meet her at a nearby playground. She asks why he didn't go overseas, says it was a good opportunity. He says he can't be friends with her forever and that he sees his opportunity there.  He gives her the necklace and she is understandably shocked and confused to her core at his confession. 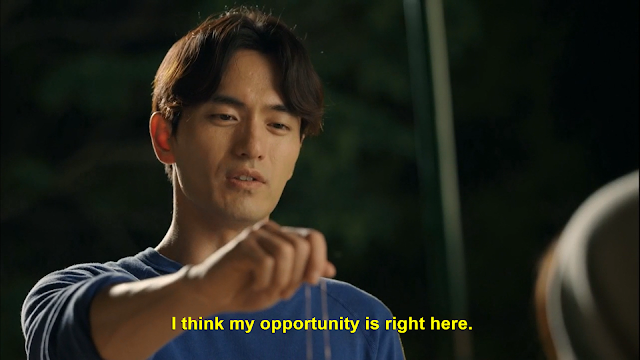 At work the next day Ha Na gets yelled at for not cancelling the soccer match until the director finds out that people are responding well. Mi Hyang and So Eun go to the piano concert, which happens to be a concert put on by Seo Hoo's teacher. Seo Hoo and Ha Na are there as well and So Eun sees them together. Mi Hyang thinks that teacher looks familiar, but cannot place him.  Meanwhile Dae Bok is eating dinner with Ha Na's co-worker who only keeps rambling about Ha Na and says she wants to come to his house. 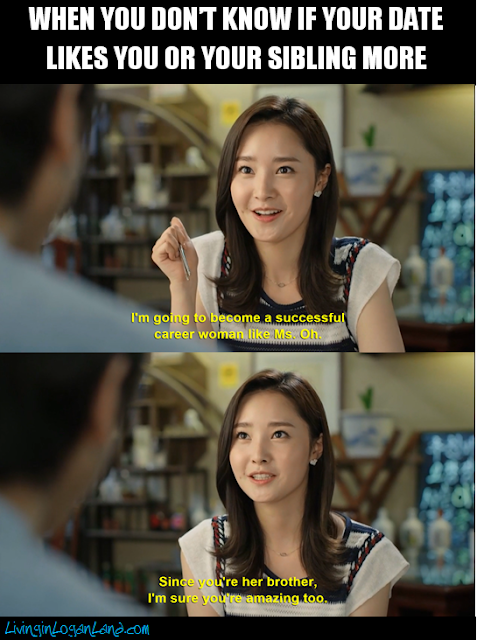 After the concert Seo Hoo visits his teacher to give him some flowers and introduces Ha Na as the girl he likes. Ha Na is going to leave, so Seo Hoo leaves with her. Once they're outside it starts to rain and Seo Hoo covers her with his hand and then run for shelter. 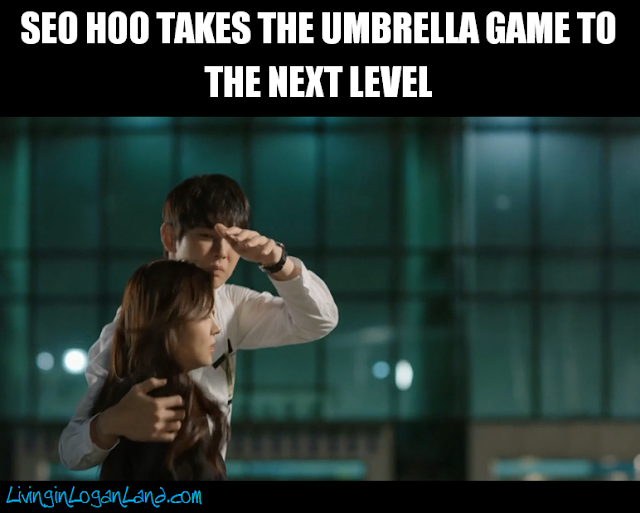 They get to his hotel room and he gives her a shirt to wear and starts drying her hair with a towel.  Things become very intimate between the two and Ha Na gets up to leave. He follows after her and they have an even more intimate moment at the door and you think they'll kiss but Ha Na leaves. 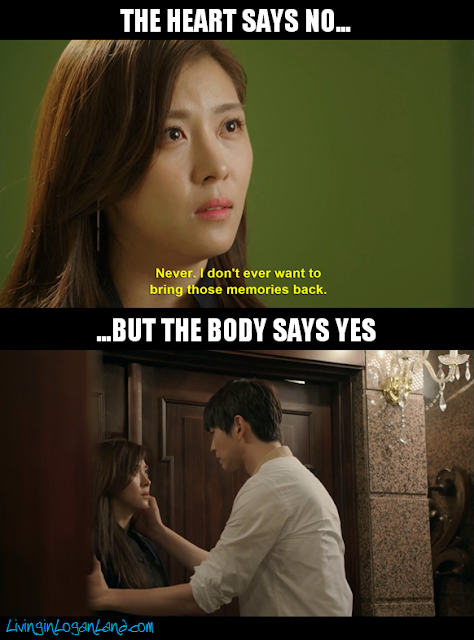 Mi Hyang comes home from the concert and is fan-girling over the piano teacher. Won goes to play basketball and when he comes back finds Ha Na waiting outside for him. 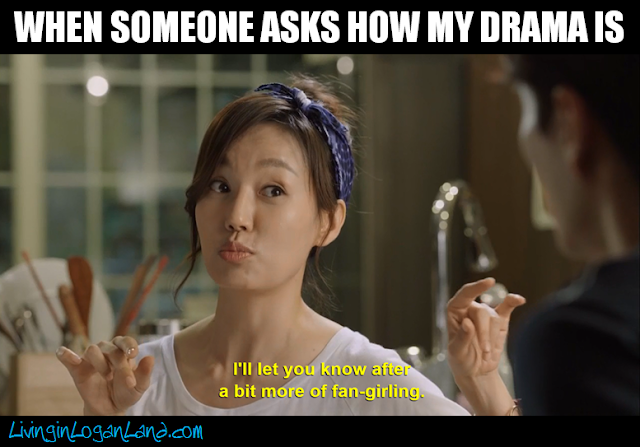 They go back to the park and she tells him that she doesn't have control over her emotions, that she can't push Seo Hoo away.  Won says that this will change their relationship but that he needs time to enter her heart and she needs time to think without him.  He tells her he's going on a trip. She's crying and he hugs her to comfort her. Then he walks away and he starts to cry as well. 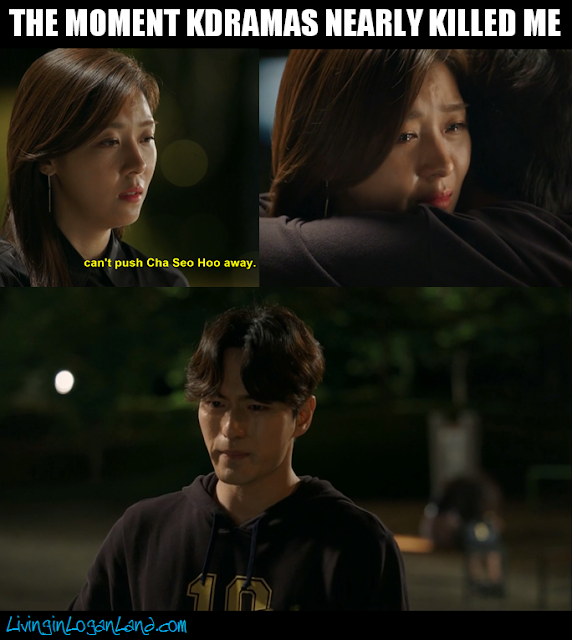 *One month later* We see Ha Na at the bus stop and Seo Hoo shows up with coffee. They take the bus together and hold hands.  She gives a killer presentation about their project with Seo Hoo at work as well. We then see her at her friends, Jung Mee and Chang Soo's, wedding. She's looking around for Won who isn't there.  Then he shows up in the middle of the ceremony, looking all rugged and wearing a backpack and hiking clothes.  And that's where we end this episode. 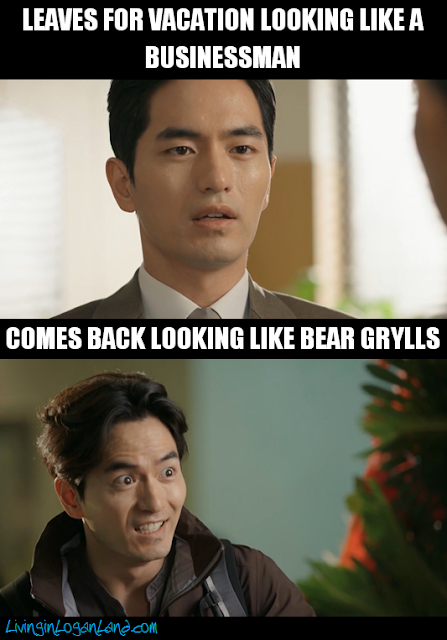 -So first off, I can't hold it in, OWWWWWW! My heart! It aches! It aches so much! It was so painful to watch Won get rejected like that. I'm pretty sure it's in a million pieces now.

-So clearly Ha Na is in one of those cases where the physical attraction is over-powering everything else.  Let's be honest. Ha Na and Seo Hoo have some INTENSE moments. And that's apparently all she can think about.  In her head, she knows he's bad news. And even though his apology and reasoning are pathetic, she still can't deny her carnal instincts. It sucks, but it's realistic. I've had more than one friend that do this. I stand and shake my head, but I understand that sometime the *ahem* "heart" wants what it wants.

-However, I would have expected her to be a lot more considerate of Won in the way that she told him. He's the most important person to her in the world. Even if she feels she needs to be honest with him, she also should show him how much he means to her. The decision to go to Seo Hoo was stupid to begin with, but the decision to do it in the way she did was even more stupid. Okay so now that those major thoughts are out, I can move on :)

-How did Ha Na end up having to be responsible for the Seo Hoo project when she didn't want to do it in the first place? What kind of screwed up logic is that?

-Even though I don't love Seo Hoo, seeing him play with those children still made my heart flutter! Curse you maternal instincts!

-GIVE UP SO EUN! Okay, I'll give her some credit in that she's not coming on so strong anymore. She gets that Won isn't into her right now, she just isn't buying the fact that he won't ever be. She's still looking for her opening. Which makes me sad for her, knowing it won't happen, but I guess I don't mind it so much when Ha Na's with another man and So Eun is being more passive. I just feel bad for her.

-Won, there was something to be desired in your confession. You didn't really come out and say "I love you". There is a small chance that Ha Na didn't get the full picture of your feelings from a wimpy confession like that. Granted, I would have loved it. But you're dealing with Ha Na here and apparently she doesn't always make the best choices or understand people's hearts.

-I would not be able to keep my hands off of Won if he showed up in front of me looking like that...just saying.

Okay, so we've had a lot to process. Take a deep breath. It's going to be okay.  We'll continue with this saga tomorrow with Episode 10. In the meantime catch up on all my posts from this drama by clicking below.

The Time That I Loved You, 7000 Days Homepage