So friends and future friends, what did you think about episode 3 of this drama? Or have you not seen it yet?  I thought it was pretty crazy. Let me recap what happened and finish up with some thoughts.

Won warns Ha Na that she's over-reacting to the intern's (who we learn has a name, Sung Jae) interest. Ha Na meets up with her childhood friend, Na Young (you know the one that liked Won when they were in high school) who's back in town and recently divorced. She's already looking for a new man. We see a flashback to when they were in high school and Na Young didn't believe there wasn't anything going on between Ha Na and Won so she brought them to a church and made them swear to it.  Won said that he liked someone else, but wouldn't say who it was. Ha Na and Na Young wondered who it could be, but quickly dropped the issue. 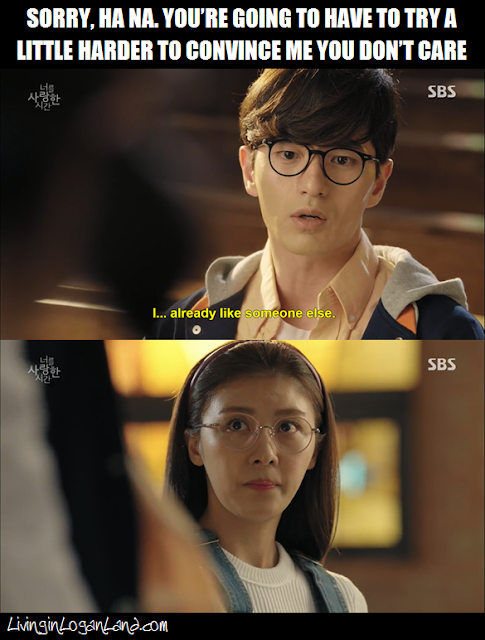 Back to present day- Ha Na meets up with Won for drinks and dinner. While they're together So Eun calls and Ha Na tells Won to invite her so he does.  They get along at first, but So Eun's tongue starts to loosen when she's had a few drinks in her.  She tells Ha Na that men must find her difficult and Won doesn't disagree.   This irritates Ha Na. Won offers to come pick Ha Na up after he drops So Eun off, but instead Ha Na has called Sung Jae to come and pick her up.  When So Eun asks if he's Ha Na's boyfriend he grabs her hand and says that he is.  Sung Jae takes Ha Na home and says that even though he knows he was being used, he doesn't care and he'll come any time she calls. As they're parting, one of the catty women from Ha Na's work sees them together. 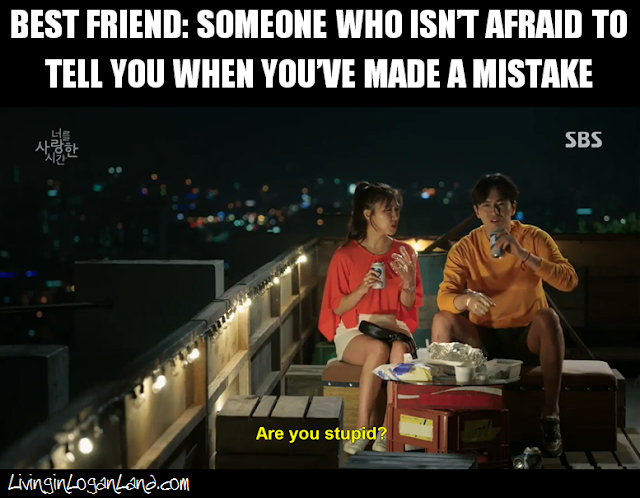 When Won and So Eun reach her house she invites Won for another drink in her front yard.  He agrees and stays for a little bit. He is about to leave when he spills alcohol on himself. He goes into So Eun's house to clean up when Ha Na calls.  She's shocked that he's still with So Eun and in her house no less and tells him to call her when he gets home.  Won and So Eun are alone in the house and Won imagines So Eun trying to seduce him and then leaves right away. When he gets home he intentionally does not call Ha Na. 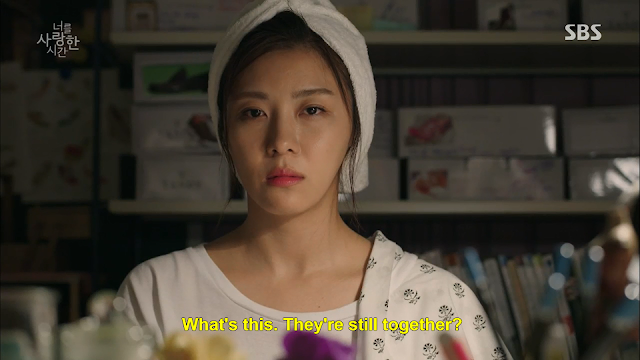 At work the next day Ha Na has finally set up a meeting with Yeon Jung, the actress endorsing her shoe, which is good news. But there are also rumors circulating around the office of her relationship with Sung Jae, even her ex seems to know. Instead of shirking away from the rumors, she tells Sung Jae in front of everyone to prepare hotel rooms for the business trip to meet with the actress and that the two of them will be going together. 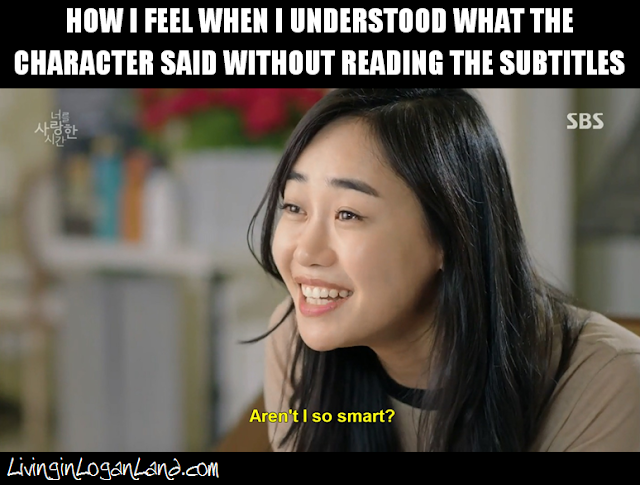 Meanwhile So Eun is attempting to curry more favor with Won and has brought Mi Hyang (his older cousin) a lunch box for her to give her favorite idol that contains his favorite foods. Won comes into the house with Ha Na's brother in tow. Ha Na's brother is introduced to So Eun and goes home to warn his parents of her. They're still intent on setting Ha Na up with Won and feel like they need to do something. After So Eun leaves Won's house she sends him a message asking him to buy her dinner if she did good by bringing Mi Hyang the lunchbox. 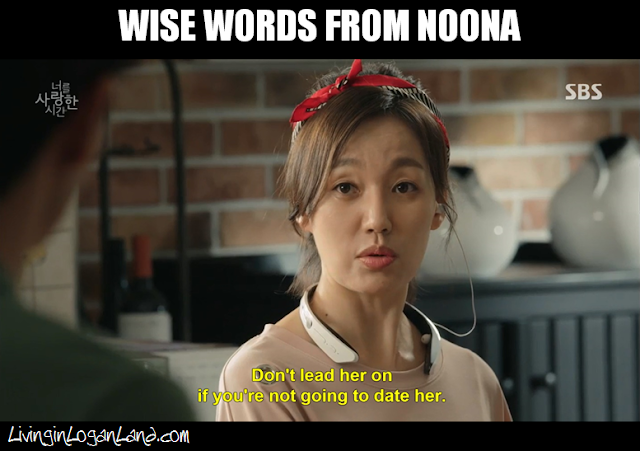 That evening Ha Na and Won are both at the same store and run in to each other. They walk home together and once they get to Ha Na's house, her parents invite Won in and have made him a special lobster dinner. They are not being very subtle about wanting the two of them to be together without explicitly saying it. Ha Na and Won laugh it off and spend a little time together hanging out as friends in her room. Won looks at a picture Ha Na has of herself and then it transitions to Won looking at a sketch of that same picture of Ha Na in a notebook he has at home. 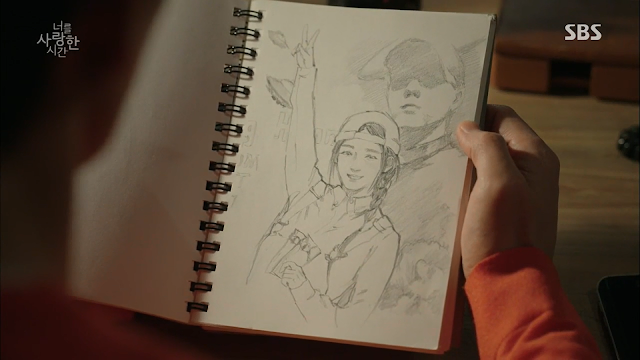 In the morning, Ha Na picks Sung Jae up for their trip. When they get to the hotel to meet with Yeon Jung. She is uncooperative at first. But then Ha Na convinces Yeon Jung to wear the shoes with a dress that she had her eye on and that Sung Jae was able to find. Yeon Jung agrees. To celebrate their success Ha Na and Sung Jae go to the market and Sung Jae even holds her hand. 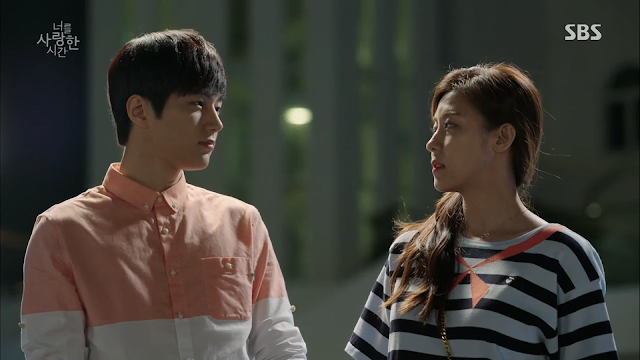 Won has agreed to buy dinner for So Eun, but instead has her come over to his place (that he shares with his noona) where he cooks for her and Mi Hyang. So Eun is surprised he's a good cook, but Mi Hyang explains that he always had to cook for himself ever since he was little.

Ha Na has decided to have champagne with Sung Jae in his hotel room to celebrate.  She takes a moment to make sure that it's something she wants to do and then sets off to his room. As she gets there the room service attendant is coming out and so she enters through the door he was exiting.  She calls for Sung Jae quietly and sees he's on the phone. She overhears him tell someone that he'll send more money when he can. That he was close to getting a full-time position; he was sure of it because he was getting close to the team leader. 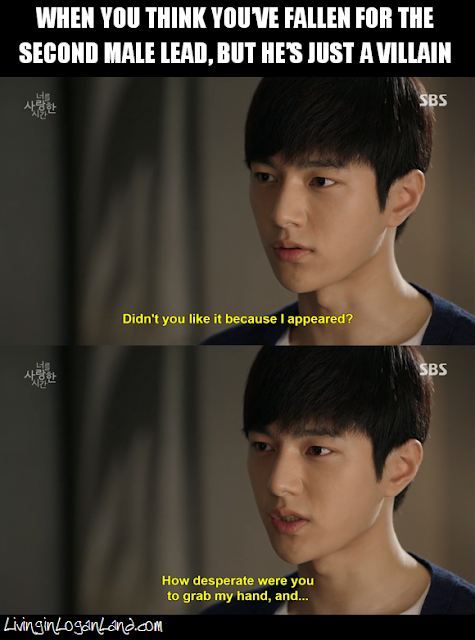 He turns around to see Ha Na.  She calls his actions low and is flabbergasted that he manipulated her the way he did just so that he could get a full-time position. He counters that she knows what it's like to be on the bottom and that she was just as desperate and asks her if it wasn't nice to have him show up. Ha Na cuts him off and leaves humiliated, although she maintains her composure until she's outside. She makes her way to the beach and begins to sob. She had really grown to like Sung Jae. Ha Na calls Won, who is still having dinner with So Eun, to cry about her troubles. 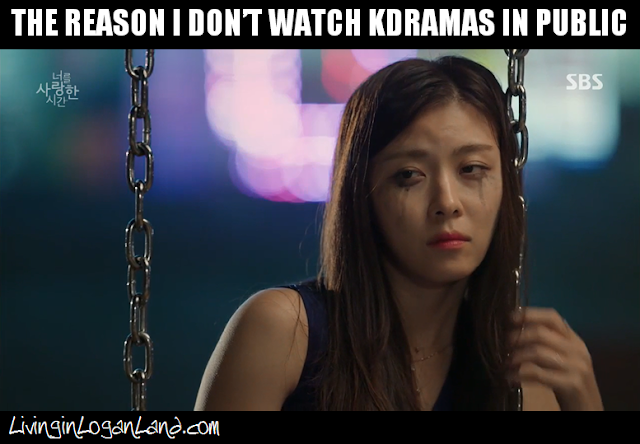 Sometime later, after she gets off the phone with Won, Ha Na is sitting on a swing on the beach, with a masacara smeared face, when it begins to rain.  Everyone else makes their way to shelter, but she sits there trying to shield herself with her purse until someone comes out behind her and shields her with their coat.  She turns to see a drenched Won smiling at her. 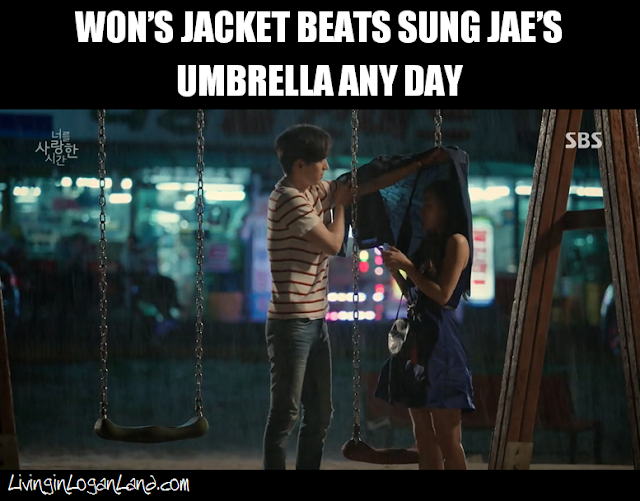 What a great episode, right? Here's what I've been thinking.

-So Eun, where's the mystery? Don't be so aggressive, girl. Take it easy.  You can't force a guy to like you.

-For all the times Ha Na gets caught out in the rain, she really needs to start carrying her own umbrella.

-Does Won have a whole sketchbook full of sketches of Ha Na or is that a new one? Either way, I'm betting that's neither the first nor only sketch he has of her. How sweet!

-I'm sure you've already predicted how disappointed I was about Sung Jae. Why do I keep getting my heart broken by charming Second Male Leads who turn out to be creepy douche bags? I mean, come on! The thing is, usually I'm Anti-Noona relationships (due to a creepy personal experience) but I thought they were so cute.  *Sigh* Oh well, let's see what's going to happen when the new second male lead is introduced shortly.

-Na Young was a little too intense as a teenager. It's pretty rude and embarrassing to your friends to make them swear that they don't like each other.  She almost ruined two different friendships with that church fiasco.  Luckily Won saved both of them by lying about liking someone else, when it's been clear that he's only liked Ha Na.

-I seriously love that instead of letting herself wither under all the salacious gossip at work, she faces it head on and shows them that she'll do whatever she wants.  She's my hero.

-Won is the closest thing on earth to Prince Charming. He comes to Ha Na when she's sobbing and broken-hearted even when he's on a date and he shields her from the rain with his coat even if it means he gets soaked. Where can I find a man like this? Please tell me I don't have to wait 7000 days.

Okay, so keeping it short and sweet his week!  Stay tuned for Episode 4's recap by tomorrow as well as the latest posting from the DramaClub. In the meantime, catch up on all available for this series as well as the complementary DramaFever Drama Clubs by clicking below.