The Scholar Who Walks The Night: First Feels

Since I recently discovered that I like historical dramas and considering how much I loved Orange Marmalade, I was ripe for either another vampire or another historical drama. When I saw that The Scholar Who Walks The Night came out and is BOTH, I  was excited. Now I'm four episodes into the series, so I thought I'd give my first feels on the drama for those thinking about checking it out. 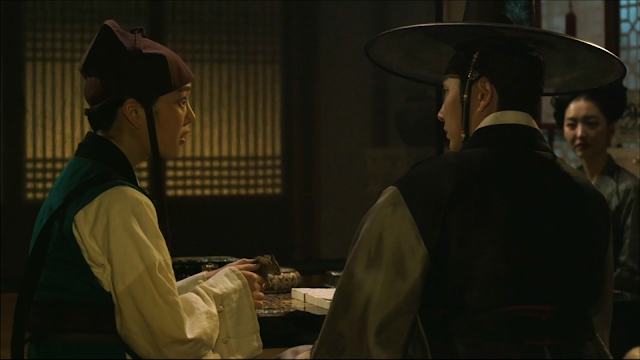 Feels like I should...Be patient and get ready for craziness

So a real quick summary for those who are unfamiliar with the drama. It's the Joseon era and the kingdom is secretly ruled by an evil vampire, Gwi, who controls the royalty like a puppet. Sung Yeol was turned into a vampire 120 years ago as part of a plot to kill Gwi and now has returned to finish the job. Yang Sun is a girl who has to disguise herself as a man in order to support her family as a bookseller.  Sung Yeol enlists Yang Sun's help in trying to find a rare book, a diary to be specific, that contains instructions for how to destroy Gwi. Sung Yeol finds out that Yang Sun is a girl, but she still doesn't know he's a vampire. She's becoming drawn to him and he's becoming drawn to her...her blood, that is.


To be honest,  I haven't felt a lot of strong emotions from it yet. Don't get me wrong, I'm enjoying it. The scenery, costumes, and graphics are beautiful. The acting is pretty good too. The storyline is creative, but it's a bit drawn out so far. The first four episodes are essentially spent searching for a book and it's heavily mentioned that they're looking for the book. I get it, it's an important book but maybe mention it a little less.  I mean there are freakin' vampires here which is a bit more interesting in my opinion. Ok, to be fair some crazy stuff does happen. The male lead eats his fiancee. The vampire villain makes himself a child vampire slave.  This is not your mother's Kdrama. So the book's a big focus, but I'm not worried. A lot of groundwork has been laid and we have a good foundation for the real crazy action to start.

We get a glimpse of where the drama is heading and the potential and I have faith in it, which leaves me still satisfied with this drama.  The blossomings of a romance between our two leads are in very early stages, but there's clearly some interest in both parts already and it's sweet. While love-hate romances can be fun, there's something so nice about a sweet romance. Even though we have the gender-bending female lead, our male lead knows pretty much right away that she is a woman, which I'm thankful for. I get very frustrated when the man thinks the female lead is a man for most of the drama. Then we have the totally spine-tinglingly creepy villain vampire. He's a great villain.  Expertly terrifying and vicious.

This drama has a lot of great elements going for it which leaves me excited to watch the future episodes. So should you watch it?  Definitely. It's got a really fun creepy story and I feel like something really crazy could happen at any moment and that's exciting.