Hi friends! Sorry for posting this a day late. I had everything ready to post yesterday, but my cousins came over for a Kdrama-watching party and so I wanted to give that all my attention. Don't worry. I'll still post Day 11's post later today.

For best sismance, there weren't a lot of choices. Unfortunately there aren't a whole lot of female friendships featured predominantly in Kdramas. However, the sismance from Wonderful Mama,between Chae Young portrayed by Jung Yoo Mi and Da Jung portrayed by Lee Chung Ah, is one that emanates #friendshipgoals to me. 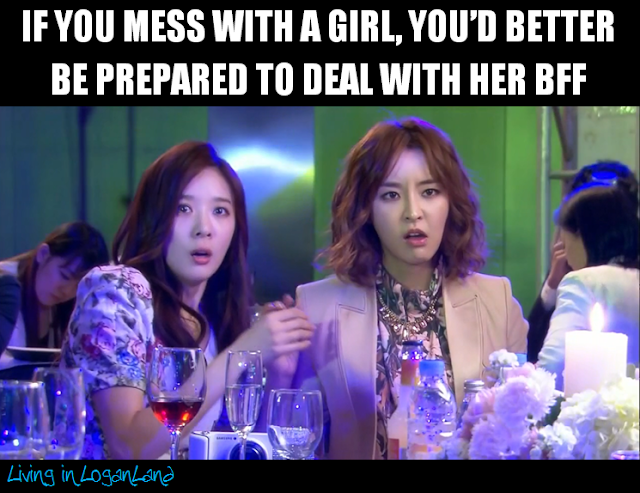 Wonderful Mama itself wasn't a very popular drama, most likely because of the number of episodes, but I must confess that it's one of my favorites. The plot, the characters, and the sweet romance had me hooked. I've said before that I feel like these longer dramas have a better payoff when it comes to romance because there's more time to develop the relationship and the characters. And because of that development, we get a well crafted sismance in Wonderful Mama.

Friends since they were kids, these two stick by each other through the good and the bad.  When Da Jung's husband is caught with another woman, it's Chae Young that confronts the wench and encourages Da Jung to stand up for herself.   Even when it puts her in an uncomfortable position with her in-laws, Da Jung defends Chae Young's character when slandered.  These two consider each other family- Da Jung's son calls Chae Young 'aunt' and they even live with Chae Young after fleeing Da Jung's unfaithful husband.  Not only that, but they eventually actually become family when Da Jung and Chae Young's twin brother fall in love.

They both are there when the other one needs a pep talk or encouragement, but the best thing about their friendship is that both still have their own lives.  Each has a lot going on but they don't exhaustively burden one another. Da Jung and Chae Young are two independent women who work hard to protect the ones they love. Their friendship is important, but they've got other important things to worry about too. They have boundaries for a healthy and supportive friendship and I really respect that. And that's why these two are my #friendship goals.

What do you guys think? Have you seen Wonderful Mama? Did you think these two friends were as cute as I did? Are there other sismances that you can think of?

You have follow along with the whole challenge here.