Happy Tuesday friends and future friends! How are y'all doing today? Good, I hope. I watched Episode 3 of Doctor Crush last night and am mere minutes away from starting Episode 4 tonight. But in the meantime, should we talk about episode 3?  I've yet to be disappointed in this drama, although I have to say my heart was ripped out and stomped on this week. Prepare to be crushed if you haven't yet watched the episode.

Episode 2 ended with Seo Woo passed out and a blazing fire having started in the warehouse.  Episode 3 resumes as Seo Woo is taken away in an ambulance and Hye Jung and Sung Hee are taken away in a policy car. Someone needs to be charged with arson according to the cop, and with Hye Jung's track record it's immediately assumed that she did it.  Grandma doesn't hear her phone ring to come to the station on Hye Jung's behalf and even though Sung Hee tries to tell the cops it was technically her that accidentally started the fire, her dad is there and pulls her away before she has the chance to. 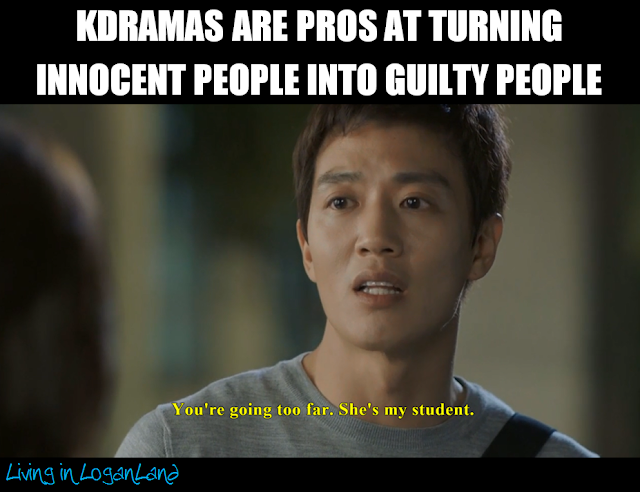 So Hye Jung is put behind bars and is being prosecuted for arson. Seo Woo, is still in the hospital with a few blisters and although she passed out before the fire started, claims Hye Jung started the fire to try to kill her.  Sung Hee calls Ji Hong and tells him about what happened. He runs to the hospital to check on Seo Woo first.  She tells him it's all his fault and won't relent in her accusation that he likes Hye Jung. 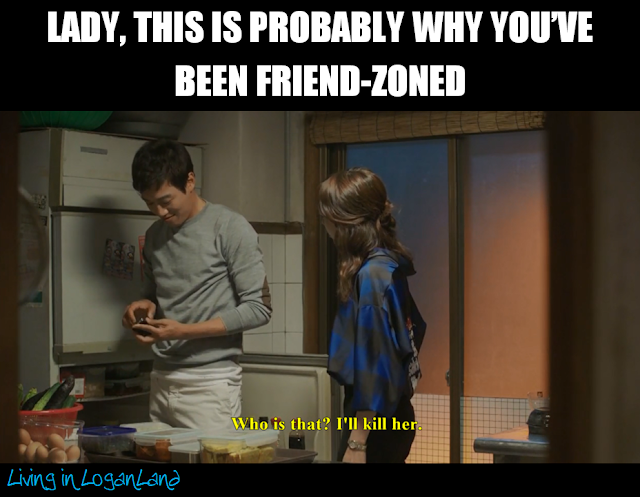 Ji Hong goes from the hospital to visit Hye Jung in jail. He brings along first aid equipment, figuring she was injured as well and it turns out that he's right as he finds a burn on her arm that she got while actually trying to protect Seo Woo from the fire. He treats her wound and she tells him she thinks it's best if he doesn't come anymore, that he should distance himself from her as they've both already been trying to keep their distance since Seo Woo's accusations started flying. 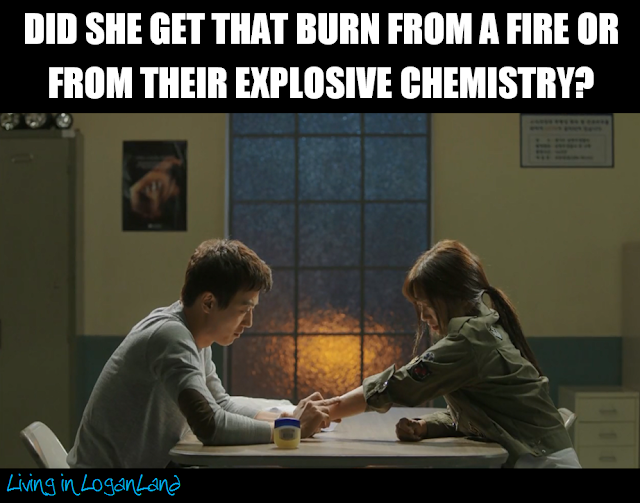 To try to protect her as much as he can, he has already turned in his resignation and asks his friend to help her get a lawyer, as he knows it'll make her look bad if he does it himself.  He leaves her to be taken care of by his friend and makes plans to move out of Grandma's and go back home. 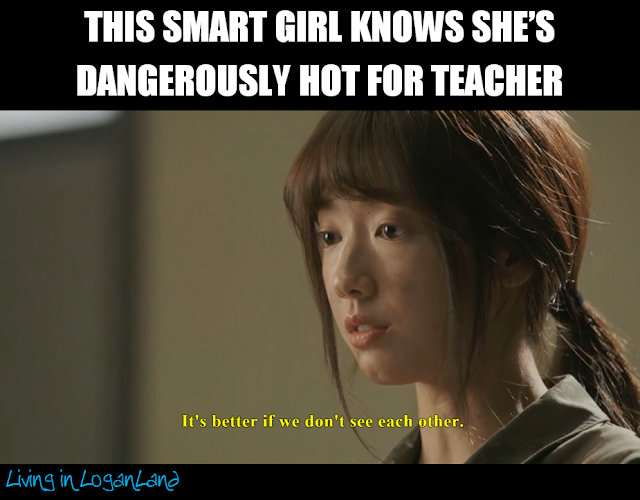 The first thing that Grandma does when she finds out about what happens is go to visit Seo Woo and her family in the hospital to beg forgiveness for what Hye Jung 'did'. This would leave one to believe that Grandma thinks Hye Jung did start the fire. But in reality, it seems that Grandma is just trying to do whatever she can to save Hye Jung. Grandma brings tonics and gets on her knees to beg forgiveness. She's shocked to find that Seo Woo's dad is her own doctor/surgeon. Seo Woo says it's okay, but Seo Woo's mom is less empathetic and screams at Grandma to get out. 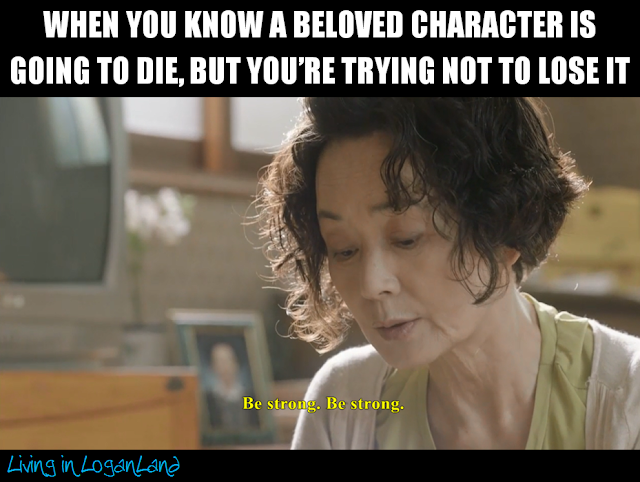 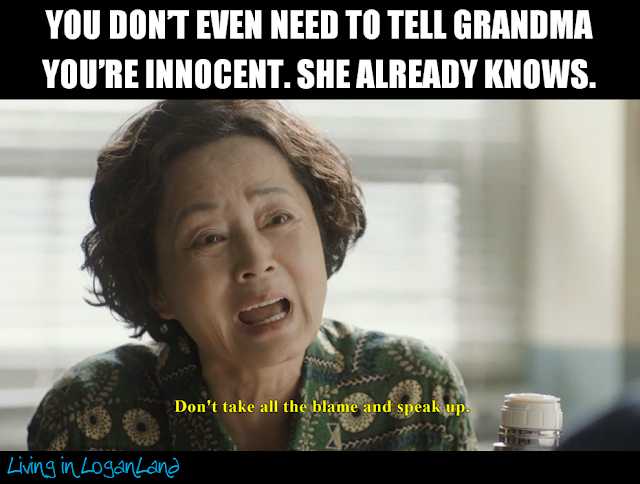 It does motivate Hye Jung to want to get out of jail, but there's really nothing she can do. She knows it was an accident and doesn't believe that Soon Hee should have to pay the price when it was Hye Jung who wanted to go there in the first place.  However, Soon Hee does not believe it is right that Hye Jung be in jail for a crime that she technically committed so she sneaks off to go to the police station to tell the police what really happened. 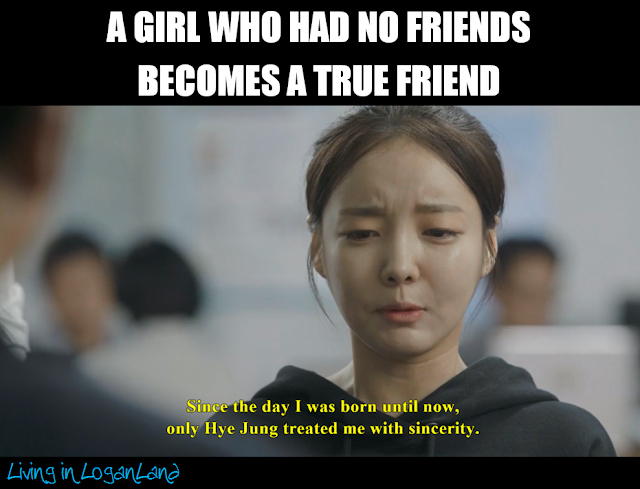 Her dad catches her just as he's confessing and asks her if Hye Jung is really more important to Soon Hee than her family and Soon Hee says that she is. That Hye Jung is the only person in her life that has ever treated Soon Hee like she's a human being, that Hye Jung actually likes her.  It hurts Hye Jung to see Soon Hee taking her place in prison, but again there's not much she can do. She goes to the hospital to tell Seo Woo that Soon Hee is now in jail and to ask her what happened, why she started to hate her. Seo Woo reveals she's not sure why, but that she just started to hate her.  Hye Jung again says she'll do anything to make their relationship better, but Seo Woo isn't interested. 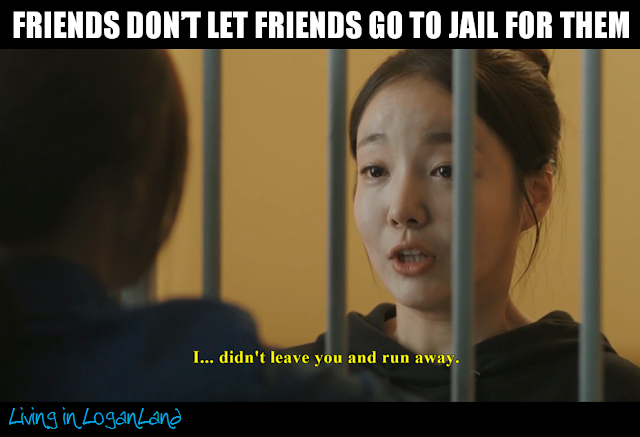 Hye Jung goes home and crawls into bed next to Grandma.  When Grandma wakes up the next morning she is so grateful to have Hye Jung free that she hugs her and weeps.  Hye Jung is with Grandma as she goes into surgery. She reassures Hye Jung that it's not that big of a deal and they're stopping it before it gets big and becomes a real problem. She tells her that her doctor knows what he's doing. 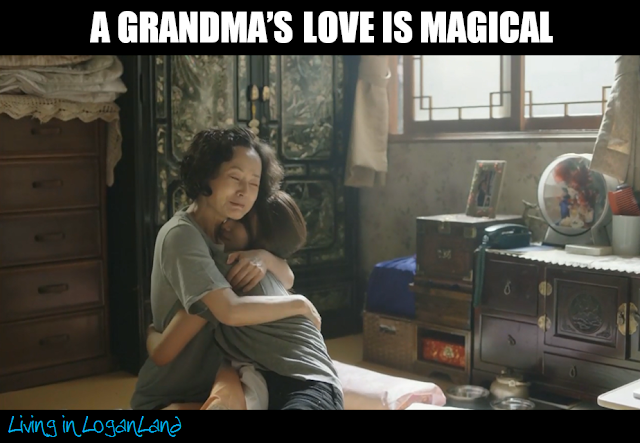 If you're getting a bad feeling about this friends, you're not alone and you're right to have that feeling.  Everything feels off about the surgery and we see into the surgery room where what looks like a pretty standard procedure all of a sudden starts to go very wrong indeed. The doctor, Seo Woo's dad, comes out and very bluntly tells Hye Jung that her grandma has died. He doesn't say sorry and he doesn't look very sorry as he rushes off to his dinner plans with his family. 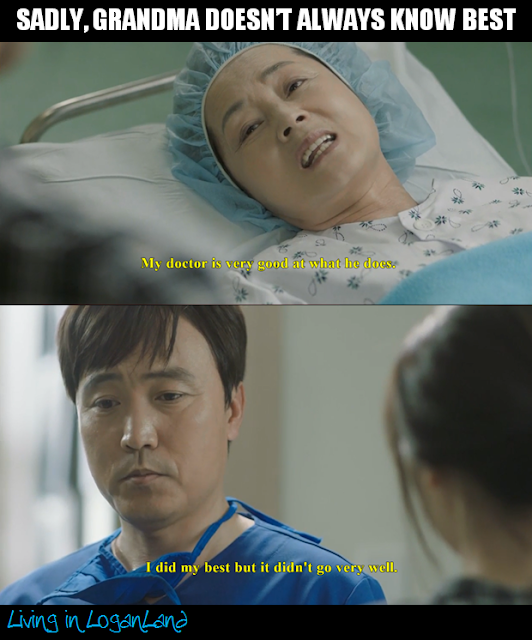 Hye Jung, of course, is absolutely devastated. The one person in the world who believed and loved her unconditionally is gone and without a logical explanation.  Her dad and step-mom show up where her step-mom proceeds to taunt her and tell her it's her fault that Grandma died while her dad just stands there quietly. 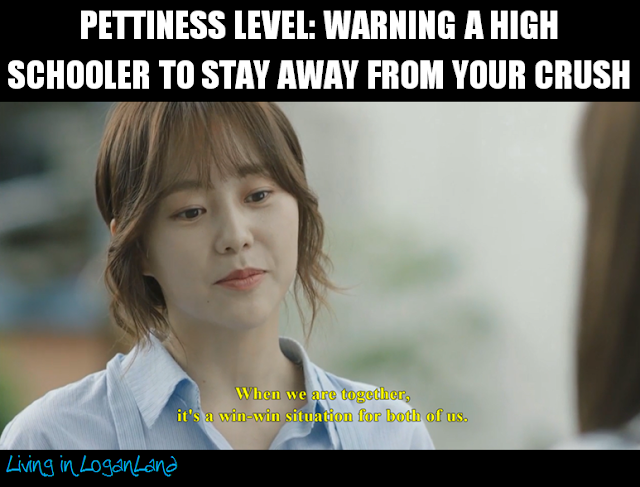 It also turns out, that they accepted money from Grandma's doctor as a result of her dying from the surgery. Hye Jung is furious, she points out how this is a sign of them making a mistake that caused her death. She sense something fishy and she goes to the hospital to confront the doctor.He is haughty in front of her and tells her that he did his best.  She accuses him of being negligent and says he should be ashamed of himself. But what can she do really? He already paid off her parents. 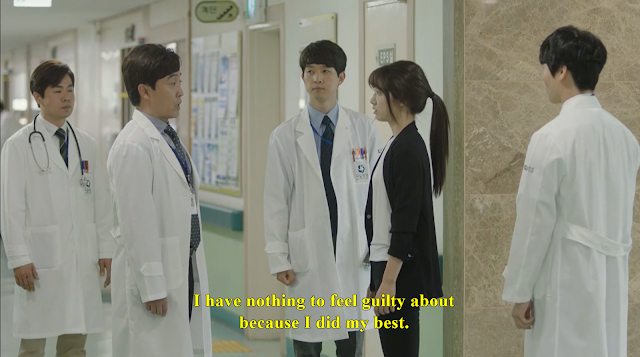 Ji Hong has just found out about Grandma and rushes to the hospital where he finds Hye Jung just leaving.  He tries to comfort her, but again she says it's best that he stay away from her. She doesn't really mean it, but she's trying to protect him. Truth is, it seems they both do have feelings for each other but know better than to act on it.  He asks her if he should really go and she says yes. She walks away and he stands there a bit shocked.  It takes him a minute to come to his senses and realize he should run after her, so he starts. 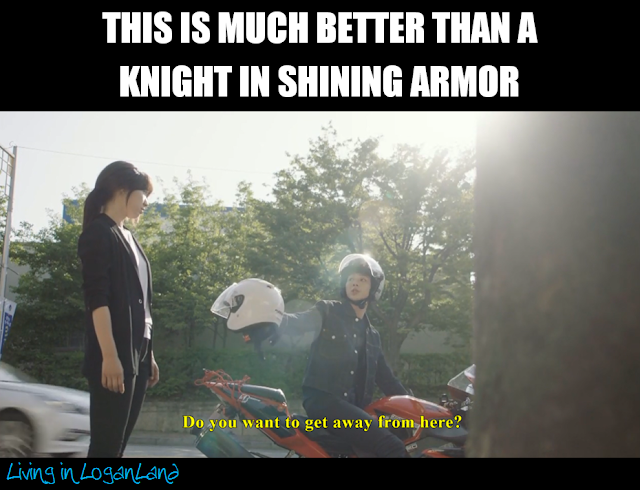 But meanwhile, Soo Chul (Ji Soo) pulls up on a motorcycle, hands Hye Jung a helmet, and asks if she wants to get away. She gets on his bike and they ride away together. Presumably, that is the last time that Ji Hong ever sees Hye Jung as the next scene kindly informs us that we're now '13 years later'.

We're back to the scene in the hospital where Hye Jung beats up the gangsters.  But we also see that Seo Woo has gone to medical school and has a crush on her sunbae who is seemingly cold to her. They see a woman collapse at a restaurant and they go back to Sunbae's hospital, which also turns out to be Hye Jung's hospital. He's irritated that Hye Jung is in a surgery room, when it wasn't cleared with him and he's the lead surgeon.

The last scene of the episode, shows Hye Jung in surgery on her mob boss patient.

My Thoughts:
-WAHHHHH!!!! GRANDMA!!!!! Not to be dramatic, but I mean I was downright sobbing.  So devastating. Even though I knew Grandma's death was coming, it didn't make it any less painful. She was the one person in the world who loved Hye Jung unconditionally. Their relationship was so pure and loving. By losing Hye Jung's grandma I feel like I lost my own grandma.

-I was on the edge about Soon Hee. I didn't know if she was going to stick by Hye Jung when times got tough of if she would bail and take Seo Woo's side, but I was so proud of her for telling the truth and taking the blame. Taking a serious look at it, she's probably one of the best examples of a true friend that I've seen in a Kdrama.

-Ji Hong doesn't have the best way with words. Certainly, he could have thought of something to say that would have been at least somewhat comforting to Hye Jung after her grandma died instead he just stood there like a doofus.

-One thing frequently witnessed in kdramas is a horrible mom producing an equally horrible daughter.  Seo Woo seems to be conflicted about the awful side of her and I really do hope she grows because the nice side of her is really enjoyable as a character. She's cute quirky and I would love to see her lose that hard jealous edge that caused her to do some regrettable things to someone who was once a friend. I'm hoping when the storyline moves to the future, that we'll see her have some remorse for how she behaved and maybe even on her father's behalf. I imagined Hye Jung might have a hard time forgiving her, though, as her dad killed Grandma.

-I don't think I'll ever get tired of Hye Jung's fighting scenes. I want to give another round of applause to Park Shin Hye. I would have never imagined she could pull them off so very well.


I'll see you again soon with episode 4's recap but in the meantime, you can keep up with all posts Doctor Crush related here on my Doctor Crush homepage. Until next time, don't be a stranger, be a friend!