Oh friends, it's so nice to talk to you. How have you been? I hope wonderful! Don't forget Father's Day is on Sunday for my American friends.  Anyway, Entertainer is over.  Should we talk about it.

The weeks starts with Suk Ho going to see Jin Woo and the two of them agreeing to give the song they stole back to the original songwriter, even though it means they both are going to have to pay the consequences. It's about friggin' time honestly. Why did it take Suk Ho 17 episodes to see this? But at least he saw it in the end. Suk Ho makes plans for the Entertainer Band to join Wild Entertainment, a big agency that will boost the band's fame, while he goes to jail. He meets up with the band and tells them this as well as the fact that he stole someone's song who then committed suicide. They're shocked, but not angry at him. They talk about it and realize how much he did for all of them and where they'd be if it weren't for him. Suk Ho turns himself into the cops and the dead songwriter's brother has to come to the police station. But the brother is weary and sad and doesn't want to press charges. Suk Ho is almost angry. He wants the punishment he thinks he deserves, but the brother says he doesn't want to bring up the painful memory and as he's leaving tells Suk Ho that he liked the Entertainer band's song. In a weird way he was indicating that getting Ha Neul's brother's song back made up for it. 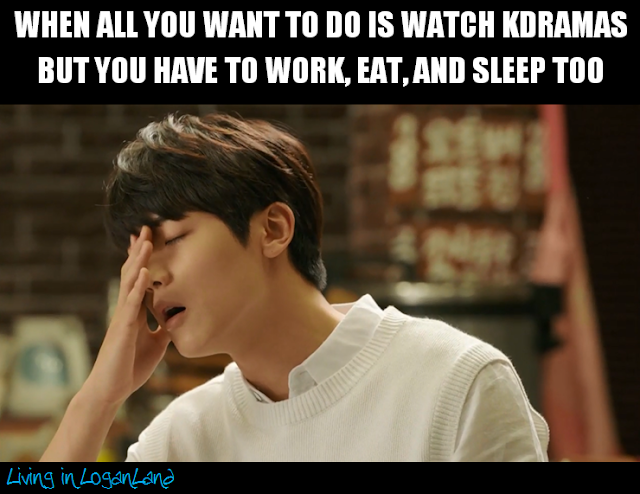 Even though Suk Ho is legally off the hook, he still wants Entertainer to go to Wild Entertainment and he sets up a meeting with their CEO, but the band refuses to go. When Suk Ho shows up to scold them, it's Kyle who tells him that they're family and they don't want to be abandoned and no matter how long it takes them, they want to do it together. 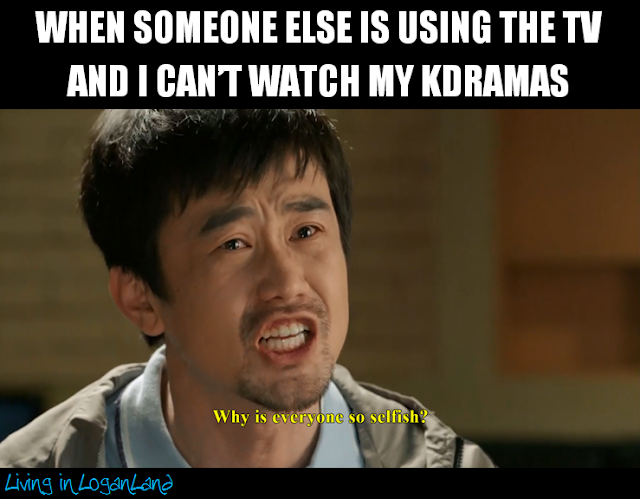 Min Joo has finally resolved herself not to care about Suk Ho as she's realized what's happening between he and Geu Rin.  Yeon Soo consoles her as he realizes she liked Suk Ho.  They seem to continue to get closer.  He gets hired to film an apartment commercial for her father's company (through no connection to her) and she even seems a little flustered by him while watching him act. 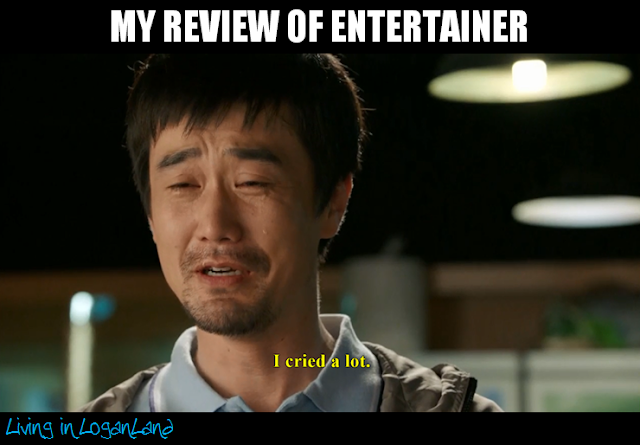 As a celebration of everything good that's happening, the band and the "adults" take a trip and they all seem pretty darn happy and that's where episode 17 ends. 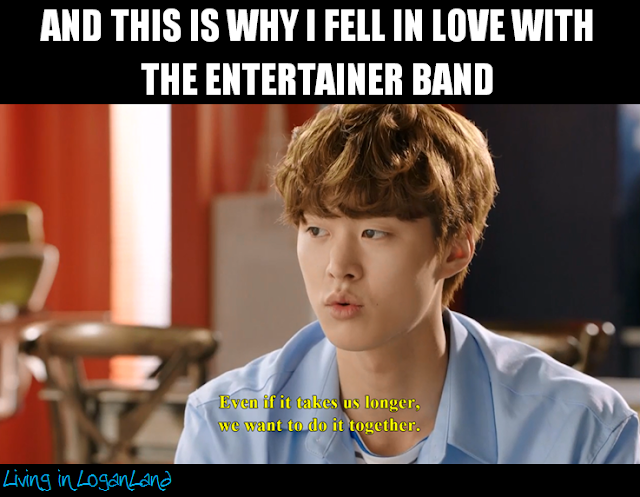 Episode 18 starts with Jin Woo writing a letter to his fans and revealing that he did not write the song written by the dead songwriting.  Suk Ho is both irritated and impressed by him. And surprisingly, his fans still support him for coming clean. Ha Neul is able to cooly confess to Geu Rin that he did/does like her, but because he sees the feelings she has for Suk Ho and because Suk Ho is such a cool guy he's able to let her go.  To her credit, she doesn't make things awkward and somehow despite everything they're able to maintain their sibling relationship unhindered and without any awkwardness. Thank the drama gods! 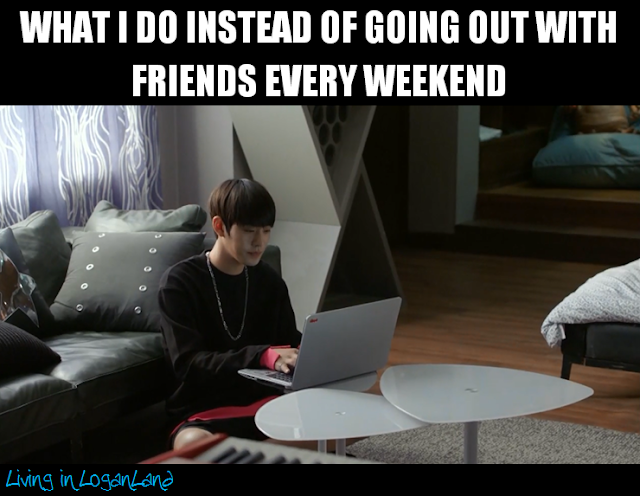 The next scene jumps forward a year. Suk Ho is now the successful president of Mango as Entertainer Band has been received quite well. Min Joo and Smiley are working together out of Mango Music on the distribution end. Ha Neul is getting cast in a drama dealing around an unrequited love and Kyle uses his fame to go clubbing. Meanwhile, Geu Rin has quit being the manager and has gone back to college where she's studying veterinary sciences. But because she's older than most of the students, she has no friends. She meets with the band and asks them to shop up at her school once so she can show everyone she knows them and make some friends, but they all seem to be too busy for her. Rude! How can they forget everything she did for them? 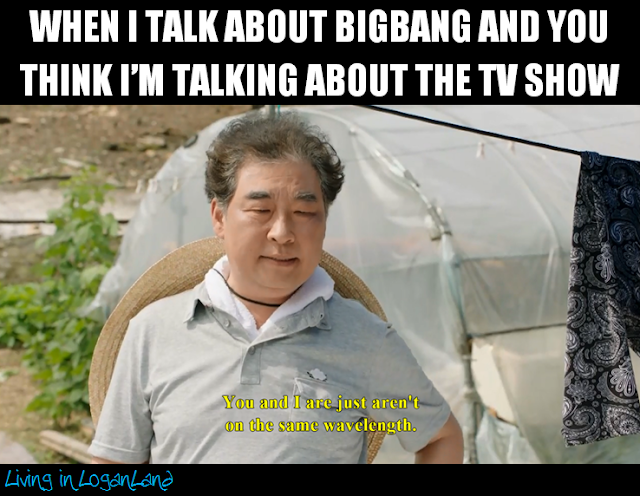 Suk Ho calls the band to a band meeting where he reveals that Jae Hoon will be leaving the band. Let me just take a minute here to say WHAT THE HELL?!? Why would they split up the family when there are only 30 minutes left to the end of the series! I almost hate the writers for this. Why would they be so cruel? Anyway, he wants to get back to studying and bring his grades back up or some crap like that. The band is understandably sad, but they don't want to keep him from doing what he wants either. 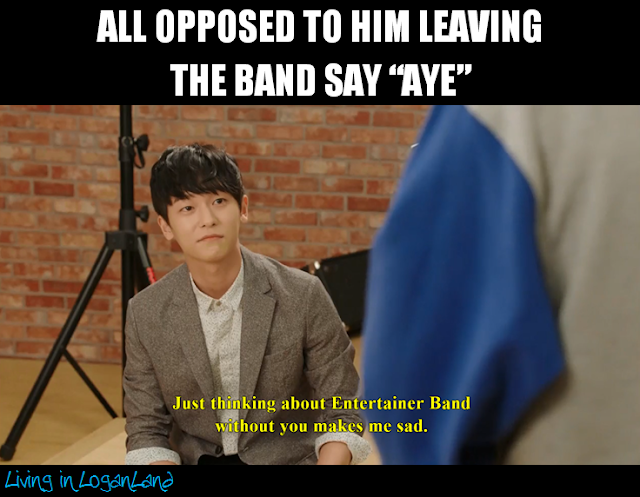 Next, Suk Ho does something unexpected and helps Ji Young (the witch that framed Ha Neul) get a role in a movie, giving her a chance to redeem herself.   Meanwhile, Ha Neul shows up at Geu Rin's school to help her out and sees a pretty girl who gives him directions. When Geu Rin sees Ha Neul she loudly exclaims for everyone to overhear that he's her little brother.  He laughs at how outlandish she's being. I'm honestly disappointed that the rest of the band didn't show up.

Geu Rin goes with Ha Neul to the studio where the rest of the band is waiting to meet the new drummer. Everyone is shocked when in comes a pretty girl. Ha Neul is especially shocked because it's the same pretty girl he saw at Geu Rin's school and she seems to like him too. 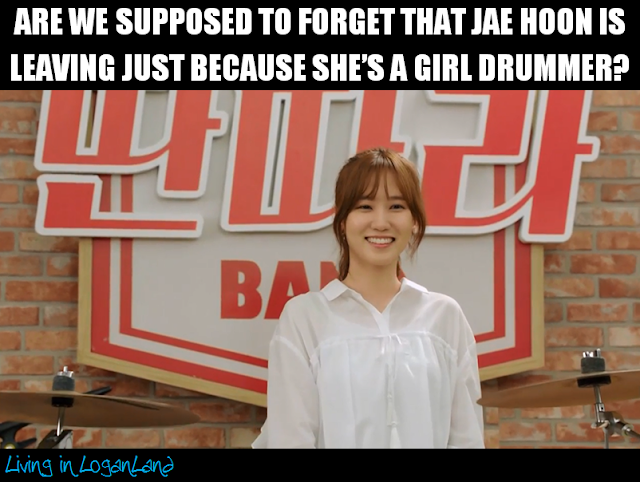 Yeon Soo, who apparently has been mooning over Min Joo without expressing himself this whole time, finally confesses to her. She seems shocked, but doesn't give him a denial and he tells her to think about it and she seems to think on it favorably. 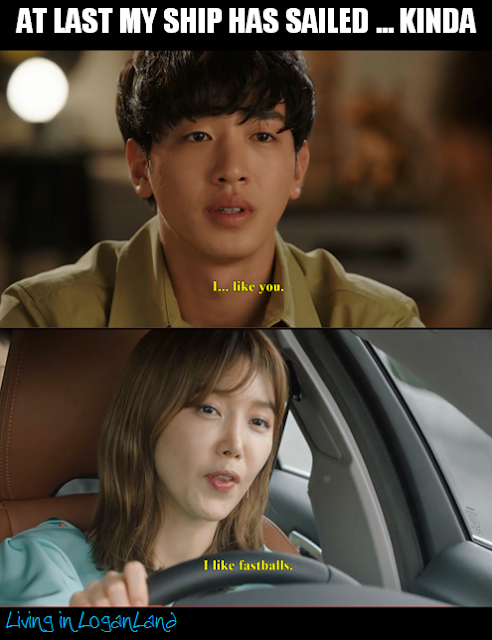 Our drama ends as the Entertainer band (in it's original form with Jae Hoon still the drummer) walks the red carpet decked out in their suits. Suk Ho is watching them from outside the red carpet when they all stop on the red carpet and refuse to go any further until he comes and joins them. Together, the five of them walk the red carpet and presumably onto a brilliant and beautiful future. So that wraps up the last 9 weeks of my life, friends. Lol. Overall, Entertainer is definitely worth a watch. The ensemble and the friendships in this drama really move your heart. Even though the last two episodes were a bit *shrugs* the rest of the drama more than made up for it. What did you all think? You can catch up on my recaps for the entire series here.

Until my next drama, friends. Which...SUPRISE... will be in just a few days as I've signed on for Doctor Crush, Park Shin Hye's new drama with the DramaFever Drama Club. I'm excited and I"ll see you then .Embrace the (k)drama, friends!
at June 17, 2016